Cannibal? Glacial, more like… There were points where that was going to be my entire review, especially during a first half which was in severe danger of boring, rather than gnawing, me into the hereafter. But much like The Razing, by the time it ended (in a scene which was remarkably poignant, considering how little resolution it offered), I found myself with a perverse respect for the maker’s rejection of cinematic convention, like “having a story” or “being interesting.” This wasn’t a case of trying to exec these things and failing: it was them simply not being on Viré’s to-do list. He has made his own damn movie, to put it mildly.

According to the synopsis, Max (Gob) is an agoraphobic who lives in the forest. Doesn’t seem to stop him from whacking golf balls around. It’s how he stumbles across a mysterious, unconscious woman (Coppejans), whom he takes to his cabin, nurses back to health and calls Bianca, since she won’t give her name. As you do. The two dysfunctional people form a dysfunctional relationship, Max being remarkably chill with Bianca’s habit of going out, finding random men to fuck… and then eat their flesh. However, her “owners” are keen to get her back, and send a trio of low-lifes out on her trail. Though this largely consists of them standing around the woods, looking bored. Viewers, whether in the woods or not, will empathise, for it’s all considerably less interesting than it sounds. 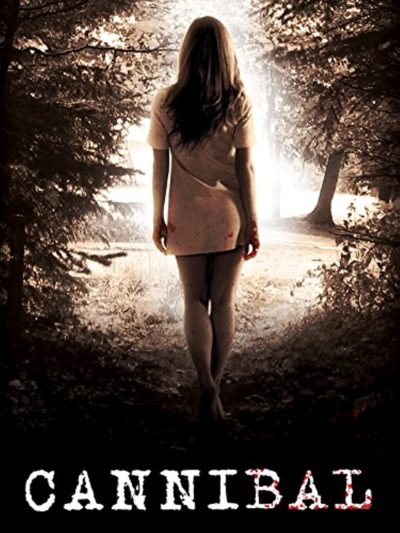 Eventually, the hunters strike, capturing Bianca and whisking her back to the city. Max eventually overcomes his not-quite-agoraphobia, and follows them to look for her. The whole tone of the film changes abruptly. Visually, it drops from a borderline monochrome into pure black-and-white. Aurally, you get harsh French hip-hop. And narratively, some stuff actually happens. OK, it includes things of questionable relevance, such as Max going to reconnect with his estranged father (played by veteran character actor Philippe Nahon). But by this point, I embraced it like a lost child. Max’s quest eventually brings him to the attention of Bianca’s keepers, who arrange a reunion with her. That’s nice of them. Er, or not. For they have turned her “talent” into a steel cage cabaret act.

Initially, this felt a little like it was inspired by Raw, from new wave horror darling Julia Ducournau. Except, it predates that by six years, which makes me ask: what is it with Belgians and cannibalism? Specifically, based on a sample size of two: what is it with Belgian film-makers and meandering plot lines which lean into cannibalism, apparently as some kind of obscure metaphor? Throw the French Trouble Every Day into the same overrated category too. This is a little less irritating, once it decides to go somewhere. Yet if you did not possess the fortitude to stick with it long enough for that, I can’t blame you. I would be willing to admit the destination is likely not worth the journey into a world where hardly anybody behaves like a normal person.