Initially, this felt like it might have been a very early example of the classic horror movie trope, described by Joe-Bob Briggs as “spam in a cabin.” For we have a group of six young people, heading out to a remote location, owned by Bjørn, the brother of one of them, Lillian (Moan). Except Bjørn has gone missing, and the local constable regales them with the cabin’s history. Tore Gruvik, the man who built it, killed his sister and her lover, then drowned himself in the nearby lake. Local lore now says anyone who stays there will be possessed, and compelled to follow suit into the water. Oh, and we’re approaching the anniversary, when Tore’s screams can be heard around the lake.

It seems like a perfect setup for something Evil Dead-like. Except, of course, it is 1958. At this point in cinema history, Hammer’s Dracula was just causing critics to retire to their fainting couches, horrified, because it had blood in it. Do not expect any explicit gore. Hell, do not expect any implicit gore. Even by the standards of fifties horror, this is milder than most. You will get some sleep-walking and a ghostly figure rising from the lake. It’s all very nicely photographed, and the performances are fine. However, it was all too low-key for my tastes. I’ve seen Scooby-Doo episodes which are hardcore horror in comparison to this. 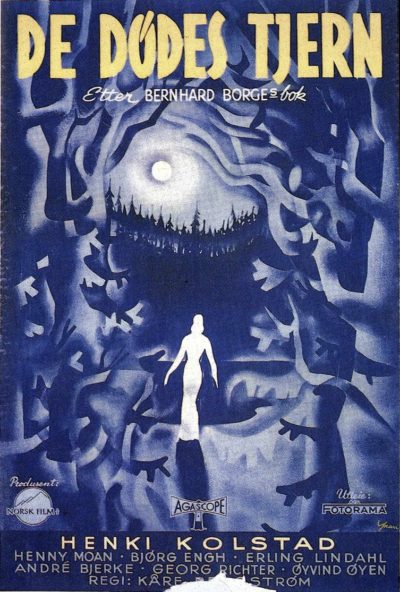 Indeed, there are points where that is perhaps the closest comparison. Such as when the team, sorry, group of friends come across footprints apparently made by a man with a wooden leg, such as Gruvik was supposed to be. Except, there’s some question about which leg is which. Hmm… Could that be… a clue??? There’s also a hypnotist in the party: he is a psychoanalyst who has thoughts regarding what’s happening. Zoinks! Mind you, so does everyone else, with theories ranging from the supernatural to the mundane. As the anniversary approaches, the party shrinks in number, due to a series of mysterious incidents. Oddly, the idea of nopeing the hell out of there, and relocating to a nice hotel in the nearest medium-sized town, never appears to crop up.

The structure is a tad weird too. There is an opening scene involving author Bernhard Borge (Kolstad), which makes it seem this is just the plot of his novel. Yet he is one of the six residents in the cabin, and we get a further dimension away from “reality”, when the diary of Bjørn is found and its entries read. It’s all quite distancing, and I kept feeling there was information being withheld from me, perhaps because I could never figure out who was supposed to be the protagonist. Consequently, I could never fully buy into the atmosphere Bergstrøm is clearly trying to sell me. Without that, despite its rep as one of the best Norwegian films, this is not much more than some attractive black-and-white cinematography, with a premise as soggy as the ground beside its lake.