One of the first films I reviewed when I started here (how long ago it seems!) was Vixens of Bandalero, a largely dreadful softcore B-movie. In that piece, I referred to the “intriguingly-titled Mermaids at War“. Three years later, that title strayed across one of my slightly disreputable sources, and so here we are. This is several notches better than Bandalero – not least because it’s shorter, clocking in at just under an hour. That includes promo clips for other titles from the same company, such as Sex and the Single Alien, starring Lisa Comshaw, which stands out due to it providing the only full-frontal nudity this has to offer. Single aliens also apparently like to shower. A lot.

This also has few pretensions, being almost entirely an excuse to see stars DeLinda and Wilde in bikinis and topless, in a variety of picturesque tropical settings. The grade above is on that basis: you are here for artificially enhanced blondes and scenery, accompanied by an amiable narration of little significance. The plot is negligible too, limited largely to DeLinda breaking up with her boyfriend while out jogging with him. Couldn’t she just have sent him a text like anyone else? Oh, hang on: 1994. I forgot. We also discover Wilde apparently has a fantasy which involves her playing the harp nekkid. It is only the second weirdest sexual situation you’re going to find on this video. 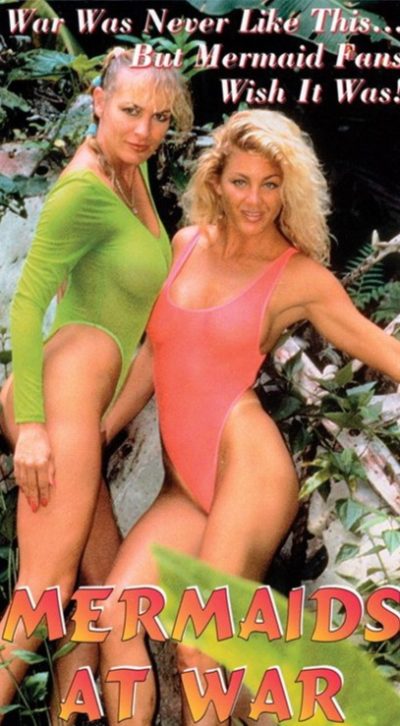 Then it’s off to Palau which, Wikipedia informs me, is a country in the Pacific with approximately 340 islands and a total area of 466 square kilometers. It seems quite scenic. In World War II it was the site of a fierce battle, in which both sides suffered heavy losses, and remnants of military hardware can still be found littering the islands. This brings us to the strangest vignette on the film, which intercuts documentary footage of World War II warfare, with our pneumatic heroines flouncing sensually around things like a tank or a crashed Zero fighter (top). Yeah, some Japanese sap probably died in that for the Emperor. “Now I understood why Kelly was so intrigued with modern history,’ intones Lori solemnly. “I could see the battles, feel the cannon fire. My mind was locked into 1944… Kelly danced like a nymph around it.”

Really, after that, the scene of the duo swimming with sharks feels almost normal. Even if I suspect it was less “with” and rather more “adjacent to” sharks – as in, occupying the same Pacific Ocean. As a result, I did think about adding this to our Shark Week feature, but that seemed an aquatic killing machine too far. Though this was considerably more entertaining than Shark Season. We get to learn some stories of local folklore too, though don’t ask me any specific details, because there may have been tits on the screen during the lesson. Much like Bandalero, it’s a throwback to an earlier era where finding such things required a greater degree of effort than two mouse clicks, and so were much more appreciated as a result.