The insanity which was Who Killed Captain Alex? captivated the Internet when it seeped out of Uganda to an international audience. It’s clear that one-man powerhouse Nabwana has not mellowed, judging by this equally mad mix of zero-budget elements. A few days ago, I said “how you do things is probably more important than what you do.” That was in regard to horror movie Wrong Turn, but I think it applies equally much here. For what this does is probably more than a bit shit. How they do it though… Hoo-boy. At its peak, which is much of the time, the joyous enthusiasm for cinema here is utterly apparent, and more infectious than Omicron Appreciation Night. 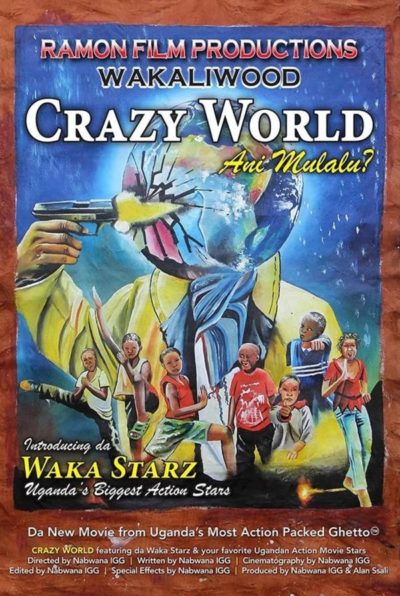 Mr. Big (Alex) is kidnapping local kids in  Wakaliga, eventually deciding on the advice of his witch-doctor to sacrifice them for good luck. His mistake is in abducting Diana (Beatrice), the daughter of Uganda’s greatest commando, Omulalu (Dauda). After going a bit crazy for a while, he mounts an assault on Mr. Big’s headquarters. Not that the kids are entirely helpless, because Diana and her little pals know kung-fu. [Why or how? Who cares!] This runs barely an hour, and that includes the director’s introduction; a trailer for upcoming film, The Return of Uncle Benon (though the IMDb says it came out in 2011!), which looks even more bonkers; and multiple interruptions from the local anti-piracy patrol. They have a firm zero-tolerance policy for unauthorized movie viewings – even by the director himself.

As with Alex, this all unfolds under a non-stop barrage of good-natured comments,  yelled by V.J. Emmie, that only enhances the berserk atmosphere. At least I was a bit more prepared this time, though there were still sequences which left me entirely lost for words. Probably the one set in a green-screen approximation of Paris, where baguettes are used to bring down a attack helicopter. Lesser film-makers would (wisely) rein in their ambition, in line with the available resources. Nabwana goes for it anyway, yet this is consistent enough with the general approach, that it becomes a style choice. However, there’s clear technical progress since Alex too. A surge of Western financing from fans has clearly been put to good use.

There are a few slack moments, to be sure, and some jokes – being charitable – might make more sense to the local audience. However, there are also genuinely amusing ones, such as “Mr. Big” being so short he is mistaken for a child. The action, too, is surprisingly good, with a couple of genuine “Ouch!” moments, which were quite likely achieved through genuine ouch. The production has, at least, upgraded from using obvious bits of wood as guns. Though it remains amazing that anything this watchable can come out from a place where electricity is ephemeral and running water a theoretical concept. It’s very much inclined to make me look askance, the next time some Hollywood big-shot complains about not getting their “fair share” of the pie.