Usually, I have a fairly good idea of a film’s final grade relatively quickly. While this may adjust somewhat, up or down, the longer a movie goes, the more it takes to move the needle. Here, however… I wasn’t sure what I thought, until the very end. Indeed, I’m still not certain. I am therefore exercising executive privilege and copping out by awarding it my default grade. I suspect this is probably the kind of film you’ll either love or hate. Either way, I can point to my generic rating and say, “Told you so.” 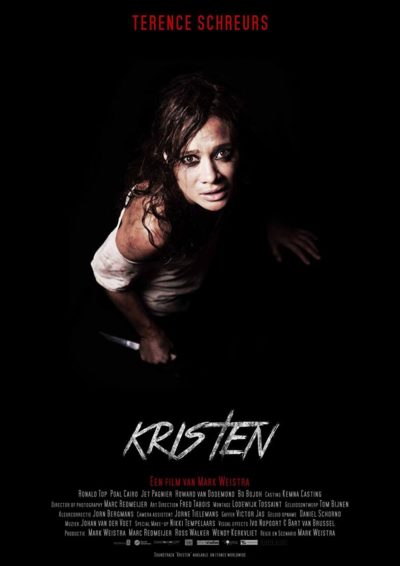 It’s the story of – surprise! – Kristen (Schreurs; apparently Terence can be a girl’s name in the Netherlands), who is cleaning up her father’s bar on New Year’s Day, while waiting for her boyfriend to show up. A phone call is received, and at first seems innocent. However, it doesn’t take long before the caller (Top) starts dropping facts that show he’s much better informed about Kristen than is comfortable. Things escalate from here, with her attempts to get help going unanswered. The caller remains implacable in his demands that the only way this is going to end, is with Kristen coming outside to join him. The longer things continue, the more our heroine begins to question her own sanity. For example, her dead mother turns up on the doorstep, before transforming into some kind of… Demon? Monster? Your guess is as good as mine there.

Even at the end, it proved deliberately vague as to the underlying concept, and you more or less had to figure it out yourself. I don’t mind films that chose to leave clues, in lieu of an obvious scenario; it’s just nice to know at the end whether you have assembled them in the right way. Otherwise, there’s a sneaking suspicion the writers were making things up as they went along, and chose to half-ass the resolution. I don’t feel that’s the case here, and tend to think my reasoning is generally sound as to what’s going on. On the other hand, the supernatural elements do seem to be used as a “get out of jail free” card, handwaving away some of the implausible moments, such as Kristen not calling anyone except the emergency services and her boyfriend.

With Schreurs the only character on screen for the vast majority of the running time, a lot of the weight falls on her shoulders: she’s not quite able to pull it off consistently, yet nor does she embarrass herself. While restrained on the gore front, Weistra does a decent enough job of racking up tension, though fans of DoesTheCatDie.com may have issues [Actually, there’s no such active site, just one for dogs, which seems speciesist to me]. Or perhaps not. Like virtually everything else in the film, it’s open to interpretation. Still, considering I went into this expecting not much more than a Euro-slasher, it was definitely a surprise to end up contemplating issues of faith, guilt and the hereafter.