I guess I must have missed the memo which told us that, in 2021, the world was crying out for a reboot of the Wrong Turn franchise. Not even a sequel, though this was originally titled Wrong Turn: The Foundation. This film instead opts to pretend the preceding six films didn’t exist. The feeling should be mutual. I’m not saying the original movies were high art – not exactly the finest cinematic hour for Henry Rollins, who appears in #2. But they had a rough energy which was occasionally fun. This, in contrast, is largely an exercise in grinding irritation and stupidity. It goes to prove that, in horror, how you do things is probably more important than what you do. 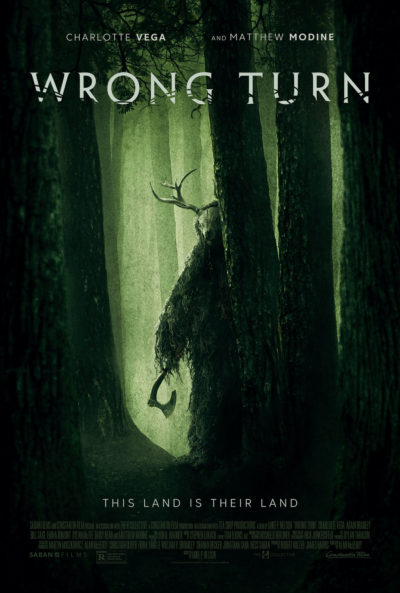 It begins with Matthew Modine rolling into town to look for his lost daughter. There is a reason Modine isn’t listed in the cast above. Before you can say “six weeks earlier”, we enter the flashback which occupies the bulk of the film’s over-long, 109 minute running time. Jen Shaw (Vega) and her five ethnically and sexually diverse friends make the first in a string of poor decisions, choosing a hiking holiday in rural Virginia. To nobody’s surprise, there’s a brush with the locals – including the line, “He forgets that talking to people isn’t like commenting on Reddit”. A movie about Reddit users? Joy. They then stray off the forest path, and fail to realize that the best way to avoid a log rolling downhill is simply to step to the side. A clash with the expected wood-inhabiting, lunatic, recluses – yet somehow technologically savvy enough to steal all the group’s cellphones – rapidly ensues.

The film’s only interesting scene follows, with the group captured and tried by The Foundation, after smashing in a member’s head. They have occupied the territory since pre-Civil War times, and don’t like tourists, especially murderous, whiny ones. The locals have rather more depth than I expected. Indeed, with pronouncements by their leader (Sage) like, “Everyone works, everyone contributes,” it seems like the kind of ecologically sound utopia which Jen and her Bernie Bros should heartily endorse. As ever though, the gap between socialist theory and practice remains roughly Venezuela-sized, eloquently expressed here in blinding with a red-hot poker. Sadly, it all reverts too quickly to Jen, now accompanied by Dad, running around a badly underlit forest. [You would not believe how hard it was to find a reasonably bright still]

Outside of the legally-sanctioned execution, this is tamer than I expected, especially considering it was written by the scribe of the original 2003 film. I don’t recall so many off-screen deaths and violence in the previous installments, though it has been a while. Jen is clearly the final girl from the start, and it’s always nice to see a liberal eventually embrace the value of the second amendment. I suspect this is not quite the moral for which the film strived. But the fact it was striving for a moral at all, should likely be enough of an explanation as to why this should be energetically avoided.