Miike’s films are almost always interesting, even when they are not necessarily successful. This certainly falls into the latter category, and I’m not sure how much it fits into the former. It’s a very distant movie, in terms of emotion, with characters it’s difficult to read, and even harder to relate to. The structure is tangled, based around a performance of a classic play called The Ghost Story of Yotsuya, first told in an 1825 kabuki play, and made into a film over 30 times since. In this telling, the unemployed samurai Iemon (Ichikawa) finally gets an offer of work, except it’s contingent on him marrying the boss’s daughter (Nakanishi). Which is awkward, since Iemon already has a wife (Shibasaki) and child. Murder, madness and more murder ensues. 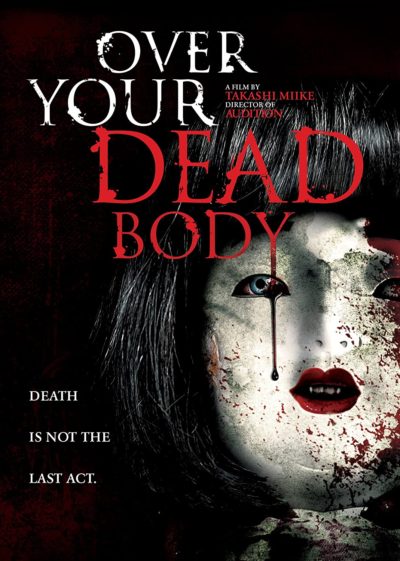 The problem for the people involved, is that life is imitating art – or maybe art is imitating life imitating art. For the actor playing Iemon, Kosuke, is in a relationship with Miyuki, the actress playing his wife. She’s trying to have a baby, but he is having an affair with Rio, who has the role of the boss’s daughter. Murder, madness and more murder ensues here too. Or maybe it doesn’t. For there is reason to doubt how much of the second half, after a specific point, has any basis in consensus reality. A good deal more could potentially be questioned, in terms of whether it happens in the play or in the real world.

To be honest, I’d probably have been happier to get a straight telling of the Ghost Story of Yotsuya, with the play captured on film by Miike. The staging is top-notch stuff, with some amazing sets (above), though they certainly err on the site of understatement. It was a considerably more compelling story, I felt, to the point I almost got annoyed when we dropped back to the real world and its humdrum tale of infidelity.

In the film’s defense, matters may not have been helped by the version available on Tubi being dubbed. I wish the service was more consistently up front about the format of its content, so I could make an informed choice i.e. to run screaming away from all dubs. A sample of the problems arising from this, is when Miyuki is staring at a pregnancy test. Since it’s labelled in Japanese, without subtitles, we in the West have no idea whether it was positive or not.

But I don’t feel this was particularly camel’s back-breaking. I felt the script didn’t have sufficient content; once you get past “Look! The play and reality are coinciding!”, you’re sitting around, wondering if Miike is ever going to give you anything to remember. There are, but only a couple of striking images, and they are not in the service of anything worthwhile. The final 10 minutes reveal a twist that may make you think for a bit, but that’s really only a result of the film not providing any significant explanation for it. The opening scene – five minutes of murky humping in near darkness – should have been taken as a sign of things to come.