For some reason, I confused Mattei with Oswaldo de Oliveira, so was prepared to describe this as being not so good as Amazon Jail. Turns out, it’s actually better than Women’s Camp 119. I just need to keep my women-in-prison directors sorted. This is part of the Black Emanuelle (one m, for copyright reasons), and seems suspiciously similar to Violenza in un carcere femminil, a.k.a. Violence in a Women’s Prison. This was directed by Mattei the previous year, under his Vincent Dawn pseudonym, sharing a number of cast members (all four listed above), and even a similar plot. Per the IMDb, “A human rights activist goes undercover in a prison to expose the corrupt officials who are mistreating the inmates.” Here, journalist Emanuelle Arsan gets sent to jail on a trumped-up drugs charge, after threatening to expose corrupt officials. 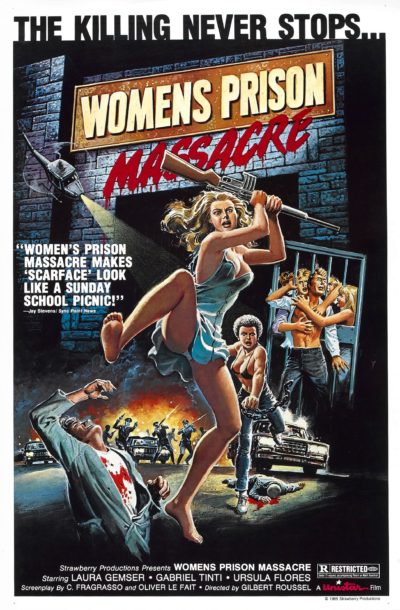 The early stages are where this is most fun, rolling out the usual tropes of the genre with some energy. Emanuelle (Gemser) crosses paths with the prison’s top dog, Albina (Flores), who rules the jail with an iron fist, and the tacit approval of the authorities, including Warden Colleen (De Selle). However, the rivalry is interrupted by the arrival of a group of truly psycho male inmates, who are being held temporarily in the jail. They break free, and take over the jail in a siege situation, repelling the (frankly feeble) attempts by the authorities to take back control, though we do get to see what a video camera looked like in 1983, It’s quite large. Needless to say, the hostage takers treat the prisoners and staff as their playthings, and we get the expected helpings of sex and violence, until the climax. There, one of those corrupt officials sees an opportunity to solve his Emanuelle problem, along with the siege.

This possesses one of the greatest pull-quotes in the history of exploitation cinema – “makes Scarface look like a Sunday School picnic” – and, naturally, isn’t quite able to live up to that level of hype. It has its moments, such as the prison yard cat-fight between Emanuelle and Albina, pictured top, which ends with the latter getting stabbed in the thigh. However, I found the arrival of the men, led by the appropriately named Crazy Boy Henderson (Tinti), acted as an unwelcome distraction. The staff were clearly quite capable of providing the nastiness required by the genre, and their replacement felt like the WiP equivalent of mansplaining.

What’s particularly odd, not least given the copious nudity elsewhere, is that Gemser keeps her kit on. Yeah, that was a surprise, as was the artsy play-within-a-film with which Mattei opens proceedings. Don’t be fooled, as it will soon settle down to delivering an adequate amount of the sex and violence for which both the director and the genre are renowned, as the male prisoners enjoy the inmates and make them play Russian Roulette. Though it’s not all one-way traffic: one particularly innovative bit of revenge, involves a razor-blade hidden in a place razer-blades don’t normally go. In that way, at least, I guess it does make Scarface look like a Sunday School picnic.