This feels like an clumsy combination of two films: while each might likely be decent enough on their own, they make for awkward bedfellows, and I’m less than convinced in the way they’ve been spliced together. The first is a post-apocalyptic road movie, beginning with the EMP of the film’s title, which knocks out power to the entire Western seaboard. Reese (Sharbino) and her father, Chris (Monaghan), are contacted through short-wave radio by her grandfather, a prepper who lives up country, and tells them to bug out. They do, but virtually everything that can go wrong, does – not helped by their own poor decisions, it has to be said. 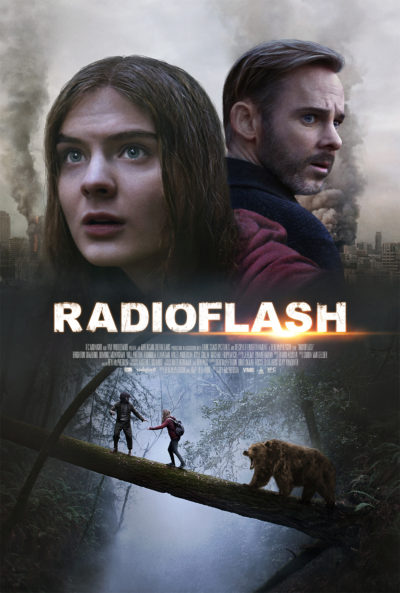 After they’ve been separated, Reese ends up, in order: rescued by an old man, accidentally kidnapped by a hijacker, and then the unwilling “guest” of a backwoods family, overseen by their wheelchair-bound matriarch (Flanagan). And the last is particular where the second half kicks off, in an Washington Chainsaw Massacre kinda way. Except, lacking the chainsaw. Or, to be honest, the massacre. And it was actually filmed with Idaho standing in for Washington. Okay, forget I said anything, alright? The EMP is largely forgotten too, in favour of survival horror, where Reese has to deal with being hung in a bag from a tree over a bear, befriend the least inbred of the family, and make a break for it, hopefully towards where her grandfather is looking for them.

It’s a curiously selective EMP, knocking out the power and cell/Internet service, but leaving modern cars (largely electronics dependent) and even Reese’s iPad otherwise intact. Indeed her device proves so indestructible, I expected to see Apple as one of the producers. That’s just about forgivable, since the specifics of what happened are deliberately left vague. Right at the end, we learn a possible explanation, though the veracity or otherwise of it remains uncertain. What’s harder to get past are the unerringly poor decisions made by Reese and Chris. I get that they’re not exactly ready for the situation, unlike Grandpa. But it’s remarkable how, given two options, they seem to have a perfect record of picking the worse one. If they were a choose your own adventure book, it wouldn’t get past chapter one.

I did enjoy some of the elements. The performances are fine, with Flanagan clearly relishing her chance to play a thoroughly loopy character. The bear also hits its marks and growls appropriately on cue. Going by the presence of multiple bear wranglers in the script, they went with a real one rather than a CGI version, which is appreciated. And I did like the scenery, which is both attractive and well-photographed, to the point that I’m looking forward to the coming apocalypse. But what is up with the mysterious bit of duct-tape apparently sported by Reese across the band’s name on her The Clash shirt (top)? Did the production forget to clear it with Joe Strummer’s estate?