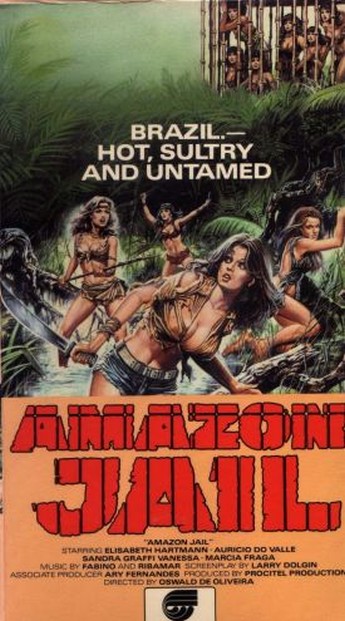 Got to love a good, sleazy women-in-prison film, and this one certainly delivers the goods, even though the title is rather misleading. There isn’t actually a jail to be seen: instead, it’s women who have been lured with promises of jobs, only to be kept in a corral as source material for white-slavers Edgar (Hingst, sporting one of the most spectacular moustaches I’ve ever seen) and his bisexual occasional girlfriend Helena (Hartman). Every so often, buyers arrive and are entertained by the prisoners, who are left in no doubt that making a good impression and being selected for purchase is the only way they’ll ever get out of the jungle hell-hole. However, things go askew as a combination of two bad moves: the capture of some local girls, who are missed much more than outsiders, leading to a search; and Edgar’s nephew (Sampson, though I could be wrong), who falls for Betty (Graffi) and agrees to provide supplies which will help her and her fellow inmates escape. When they do, however, it’s out of the frying pan and into the fire, as they are “rescued” by a gold-mining operation, who have been starved of female company for quite some time. Oh, and appear also be Satanists. This’ll end well.

It’s hard to describe this as misogynist, when it genuinely seems to have a very low regard for both sexes: while the women’s clothes fall off at the drop of… Well, just about anything, the men are almost exclusively portrayed as stupid animals, boorish slaves to their passions. The women are pretty much the only sharp tools in the box, and don’t hesitate to use their wiles to get whatever they want. This is not exactly the sort of film which will restore your faith in humanity. Coherence and smartness are not the film’s main strong points, however: the plot forgets about Edgar and Helena, after making them the first-half focus, and the girls’ escape plan seems to involve turning the corral into an inferno. No possible downside there. However, in fairness, coherence and smartness are not exactly the main focus either, and while its targets are undeniably of the lurid and low-hanging variety, de Oliverira (best known for Bare Behind Bars, which I’m now inclined to track down) hits them all with unerring precision. It’s even educational: you’ll learn that “Brazillian waxes” apparently date from after 1980, when this was filmed. The more you know….