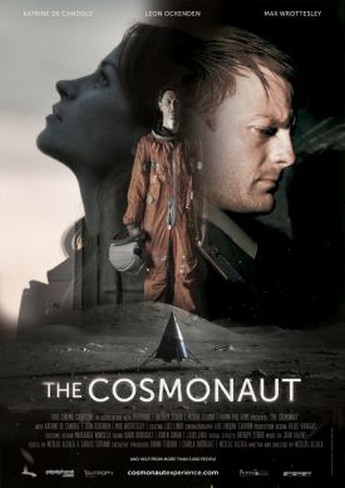 An intriguing yet ultimately unsatisfying experience, this is most interesting for its crowd-funded approach to raising money, though it seems that was a minor source rather than the main approach, which was the usual private investment and pre-sales. It tells the story of a Russian cosmonaut, Stas (Ockenden), whose spacecraft suffered a catastrophic failure in 1975 when on a mission to become the first Soviet man on the moon. Written off as lost, seven months later, it returns to the atmosphere: only, when it lands, the capsule is found by rescuers to be empty. From Stas’s point of view, however, he is back on Earth and it’s everyone else who has gone missing. In flash-back, he remembers his life before take-off, when he and Andrei (Wrottesley) were simultaneously friends and rivals for the affections of Yulia (De Candole, looking not unlike a young Kinski).

Got to respect the perseverance on display here, and willingness to throw the end product out there, on a “pay what you think it’s worth” basis. However, the film’s origins as a short movie are rather too obvious, and the script comes over more as unfinished and half-baked, rather than the air of mystery for which the makers appear to be aiming. There’s basically no explanation for what has happened. Where was Stas for the missing time? Why is he now apparently invisible? It’s infuriatingly vague, and I suspect the makers would have been better off spending some of the time spent on 20-odd minutes of credits, thanking every one of their two-euro backers, to clarify these important points. I did appreciate both the evocative soundtrack and some impressive cinematography, while the production values are also better than you might expect. But there’s little here which couldn’t have been done in a briskly-told 15 minutes, and almost certainly would be better in such a format.