There’s a good case to made for this obscurity being the first depiction in a movie of what we now call “virtual reality”, even though the term wasn’t used in this context at the time of making. In it, a group of four men and one women, including Michael Lewis (Dullea), regain consciousness with no memory, in something approaching a hyper-violent version of the Old West. All they have is a card in their pocket, informing them they’re murderers. They reach the nearby town of Blood City, run by Sheriff Frendlander (Palance), where they are little more than slaves. The only way to become a free citizen is to kill, and if you kill twenty, you become Immortal. With the help of local Katherine (Eggar), Lewis does achieve citizenship, yet won’t keep playing the town’s brutal games.

For this is not the holiday resort of Westworld. In the real world, we see that it is all a simulation, in which Lewis and friends are unwitting participants. With society on the edge of tipping into anarchy and chaos, the project is designed to identify individuals who are best suited to enforce the law. Eggar shows up here as well, playing one of the scientists running the program, under her supervisor (Morse). Lewis’s conditioning proves rather less than bulletproof, and like Murphy in Robocop, starts to remember his previous life. One might even suggest he is approaching the point of… total recall. [Cough] 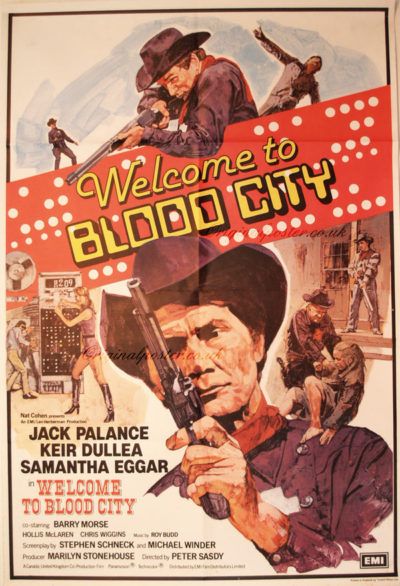 I think it reveals the simulation twist far too soon. Doing so severely dilutes the stakes for events in Blood City, since we know these are not “really” happening. It’s never clear either, why the authorities are going to what is clearly an enormous degree of trouble. A psych evaluation would be cheaper, and likely just as efficient. The seventies view of future tech is in line with other SF efforts of the time e.g. Soylent Green, and has not stood the test of time well, to say the least. Director Sasdy seems less well-suited for the awkward slice of neo-dystopia depicted in the contemporary sequences, than the Hammer period pieces he made, such as Countess Dracula or Hands of the Ripper.

Things generally work better in Blood City, anchored by the formidable presence of veteran Palance. This was made in his wilderness years – there was a 38-year wait between his Supporting Actor Oscar nomination for Shane, and winning that category for City Slickers. Yet his Western experience, here helps sell a setting where human life is close to worthless. Dullea and Eggar are decent, but it feels as if without Palance, this would be a mid-tier TV Movie of the Week. Matters aren’t helped there by every available print being badly cropped, cut down to 4:3 ratio. Witness the scanning needed during the opening credits: you may get whiplash. Little more than a curio, turns out Tarantino talked about it on his podcast recently (not that I knew when watching it). Like most of QT’s fetishes, this is not one I share.