This feels like it may be the first “post COVID-19” movie. Not because it is about the disease – it isn’t even mentioned. But its style feels, for want of a better phrase, “socially distant.” There are hardly any scenes with two people in the same location, talking directly to each other. Instead, this mockumentary is assembled out of interviews, social media videos, news reports, etc. When a conversation has to occur, it takes place over the telephone or Internet. Six months ago, this would probably have seemed bizarre. Now, it just feels like an accurate reflection of the disconnected world in which we live. 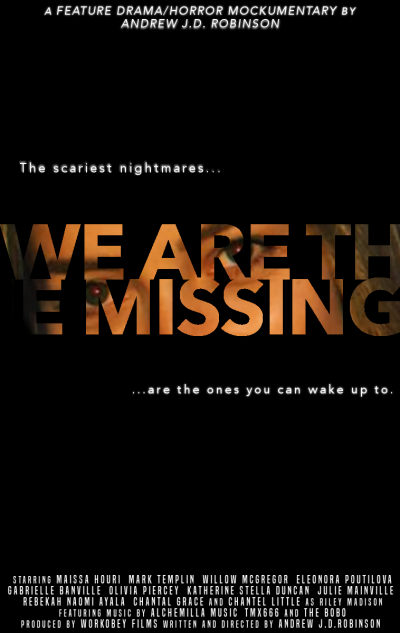 The same mundanity does not apply to the content, which escalates steadily from the tragically familiar. Riley Madison is a young woman who has suddenly gone missing, not even taking her shoes. Initially, the film plays as a depiction of the impact this disappearance has on those around her. In particular, on mother Angie (Houri), father John (Templin), and best friend Mackenzie Porter (Mcgregor). What happened? Was Riley depressed? Could her family and friends have prevented it? Where is she now? There’s no closure possible, due to the lack of any answers, and the dead-ends in the investigation. For example, Riley blocking a guy on social media seems potentially meaningful, but it turns out he’s just your standard jerk.

Then, things get strange. First, Angie and John vanish without a trace. Then Mackenzie as well, leaving the documentary film-maker, Carter (Poutilova) struggling for direction. It quickly becomes clear that the story is bigger than just Riley, with a tsunami of disappearances enveloping the Canadian town of D’Arcadia. The locals become terrified to leave their homes for fear of what might happen to them. with creepy messages being received, consisting of a repeated single word: “Hide.” Elements of this feel like a metaphor for COVID-19, as do later lines such as “Since that fateful night, the curve flattened… People began to leave their homes again; stores re-opened, and over time, life returned to normal.”

If you’re looking for any kind of explanation here, you won’t find one, and in that, it’s similar to the most (in)famous of horror mockumentaries, Blair Witch. This doesn’t provoke nearly the same sense of annoyance, fortunately, and is considerably more solid technically: the early going looks like it could be a true crime doc off Investigation Discovery. Instead of seeking traditional distribution, Robinson has posted the full film for free on YouTube – I’ve embedded it below. Given the flexibility this method gives, it might have worked better at less than feature length. Not all the clips are equally effective, and some meander on long after any point has been established. A taut 50-minute tale would probably have been more successful than a looser 84-minute edition. But it’s certainly worth a look, and I’d call it a better use of your time than a lot of the movies you’ll find on pay channels like Netflix or Amazon Prime.