If you thought “Blade Runner 2049 was okay, but it really needed more gratuitous sex,” then we have the film for you. It is sub-titled “Do Sheltered Young Ladies Dream of Electric Butlers?”, though equally accurate would be “Do Electric Butlers Dream of  Sheltered Young Ladies?” The woman in question is Tamayo (Aine), a heiress whose sole companions are a pair of androids, the hunky Suketomo (Tanaka) and the large but dumb Suketake. For her 18th birthday, she gets a third bot (Tokumoto), whom she names Sukekiyo. He’s kinda dorky and inept, but develops a crush on Tamayo and is happy to pander to her every whim, even if it means running for miles to bring her ramen. 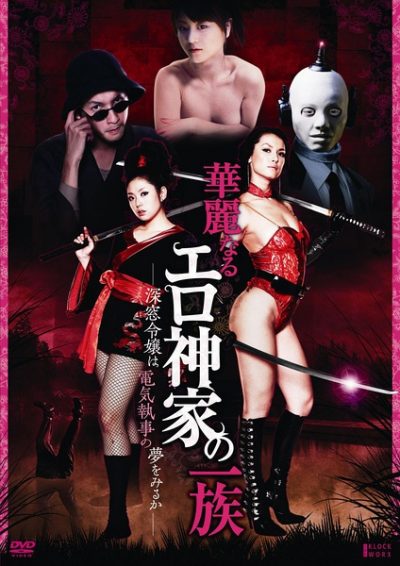 However, plotting against Tamayo, seeking to take her inheritance, are Tsukiyo (Ozawa) and her henchwoman, Azami (Asami). With the help of their “twilight detective” pal Hajime Kaneda, they will hack into the androids and turn them against their mistress. I’m guessing Kaneda is intended as a spoof of Hajime Kindaichi, from The Kindaichi Case Files. When someone calls him Kindaichi, he quickly corrects them, saying, “If you make a mistake here, a copyright problem will occur.” They seem, however, a bit more cavalier about potential Western copyright, the robots having been created by “leading authority” on androids, Dr. Philip K. Dick. I wish they’d gone further with this, if only so I could make a crack about the film being full of Dick jokes.

They’d not be inappropriate, considering the frequency with which people, the women in particular, take their clothes off. For despite having turned 18, Tamayo is apparently still in the “curious” phase about sex. This begins with Tamayo’s bath-time, alongside her new, plastic pal who’s fun to be with – plus is waterproof and anatomically correct to boot. But when he’s off shopping for Cup Noodles, Suketomo is making his own play for some fleshly delights with his mistress. Though I don’t know what to make of his skills which go from “American sex, which is just rough, to European, which quests for the abnormal.” Should I be offended?

The second half shifts toward the plot to have Tamayo killed by her droids, and it’s up to Sukekiyo to save her. He turns out to be more advanced than anyone thought, so can resist the hacking, When the other two droids fail [the waterproof thing turns out to be significant], Tsukiyo and Azami take matters into their own hands, and Kaneda’s loyalties aren’t quite where they seemed. It all ends up getting rather gory, but can never escape its very humble origins as low-budget soft-porn,despite performances which are slightly better than you might expect. The androids are never even slightly convincing – Sukekiyo has a white mask on and bits of plastic glued to his head – and the story hardly makes any real attempt at contemplating the nature of what it means to be human and/or artificial. It could perhaps have done with less dick and more Dick.