We are in the zombie post-apocalypse, with the disease under control, having apparently been largely confined to the male population. Most women have moved on with their lives, but that’s not so much the case for Joyce (Shenk). She lost her husband, Robin (Hodgson) to the pandemic. Or, perhaps not so much lost as had him…changed. For despite his new-found taste for human flesh, she has kept him around in a zombie state. She feeds him a diet of criminals, low-lives and others unfortunate enough to cross her path. However, the neighbours are beginning to talk, in uncomplimentary terms, about the “unnaturalness” of Joyce and Robin’s relationship, led by the religious fervor of Cat (Martin). They begin tooling up for a heavily-armed intervention. The police, in the shape of Detective Feight (Rodriguez), are not helping matters, and are becoming increasingly concerned about the recent spate of disappearances. 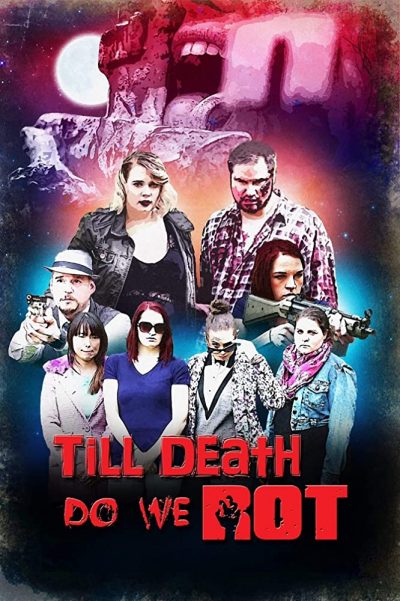 This had its origins in a 14-minute short film, and that’s the problem right there. Expanding it up to six times the length requires six times the content, and while the original idea is a decent one, much of what’s added to reach a feature length running-time is nowhere near as good. This gets into trouble right from the opening scene: a lengthy phone conversation as a woman makes a complaint about a product which was supposed to return her dead husband to his “former glory”. If we could have heard both sides, this might have been better; it’s not even as if the woman is the significant character. It’s unamusing padding, with a weak payoff, and when the audience is looking at his phone within five minutes, a film is in trouble.

Thereafter, it’s a very mixed bag. You’ll have one scene that works well, then two which clearly struggle, not helped by the greatly variable (to be kind) quality of the acting, especially among the minor characters. It does occasionally achieve a degree of deadpan self-awareness. When one of the women is quizzed as to her firearm skills, she replies, “I watch a lot of action movies. I mean, how hard is it? If Jodie Foster can do it, why the hell can’t I?” Or there’s a scene where Robin fights off another zombie that tries to chow down on Joyce, not something you see often.

But much of the rest is little more than a parade of the usual zombie movie cliches, which passed their sell-by date a decade ago. The effects, while getting credit for going largely old school and practical rather than CGI, are no great shakes, including some of the most unrealistically coloured “blood” I’ve seen in a film. Things aren’t helped by Skalonha’s directorial style, which seems to consist of pushing the camera in too close to his subjects, cutting off their heads or limbs. Is he allergic to wide shots or something? It is the story, though, which needed a lot more development before it should have been considered ready to shoot.