This manages to both try to do too much with its lead character, and do not nearly enough. Gloria Nation (Grotte) has been – in no particular order – leader of an all-female motorcycle gang, a Marine, a bounty hunter, and owner of a tattoo parlour. Sometimes more than one, simultaneously. Her biker husband (MMA’S Chuck Liddell) is in jail, and is reluctant to give her the divorce she wants. But things really come to a head when her son is killed in a school shooting incident, for which he is blamed. Gloria stumbles across a witness who knows the real culprit was the daughter of Russian mobster Josip Aleksander (Bellows). But keeping the witness alive will be quite the challenge, especially since her spouse was doing business with Aleksander. 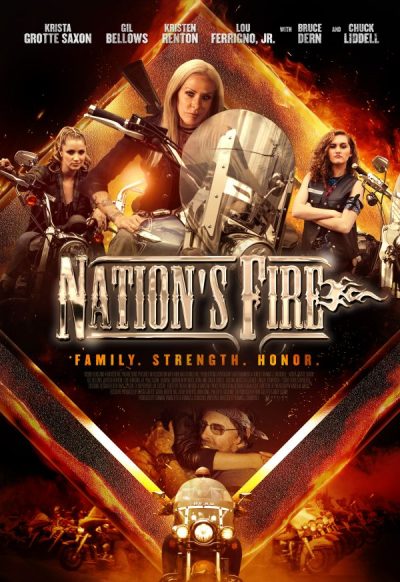 There’s quite a high-profile supporting cast here, led by two-time Oscar nominee Dern as Gloria’s father. Laurene Landon plays her alcoholic mother, and in addition to Liddell, Lou Ferrigno’s son, Louis Jr., also appears. However, these work more as a distraction than an enhancement. The plot has quite enough of those already, so it’s not as it needs the help. The initial set-up has it looking as if it’s going to focus on Gloria, who struts into a bar in her bail-bondswoman persona, to take down her target. This is not a bad start. Unfortunately, the film then all but abandons her for the majority of the first half, in favour of some low-rent Sons of Anarchy bullshit. It never recovers.

By the time we get to the school shooting which is the beginning of the core story, we are already 35 minutes in (and it feels considerably longer). We are also supposed to believe her son is completely oblivious to the Mac-10 powered carnage unfolding feet away from him, because he has earbuds in. I’ll take a pair of those, purely for noise-cancelling purposes. There is then the cinematically obligatory period of mourning montage, and further biker shenanigans, until Gloria stumbles on the young eye-witness who can clear her son’s name. They hole up in her tattoo parlour, but Josip has no intention in letting the truth come out, and sends his goons to ensure that doesn’t happen.

And while certainly showing up far too late to the party, that’s where the action finally kicks in. It is surprisingly gory with considerably more arterial spurting than I expected, and also a pair of unexpected exploding heads by shotgun blast. Even if it may actually be the same exploding head used twice (since it does look suspiciously similar), I still have to applaud the effort put into the special effects. The rest of it, though? Far too many cliches, despite being a rather more sympathetic portrayal of biker culture than you often see, heavy on brotherhood and loyalty. If there had been more sisterhood instead, delivering the girl-gang fun promised by the cover – as an aside, I can’t believe The Asylum hasn’t yet made Daughters of Anarchy – this might have had a better chance of passing the sub-mediocre heights it achieves.