I can see why Hammer would look at adding Robert Louis Stevenson’s Dr Jekyll and Mister Hyde to their slew of classic literary horror adaptations. Their versions of Dracula and Frankenstein had already proven massively successful, and this goes down the same general road as the latter, with science meddling in things which should be the realm of God. However, it doesn’t work, right from the moment Dr. Jekyll (Massie) shuffles onto screen. For underneath a disturbing amount of woefully fake facial hair, which miraculously vanishes post-transformation, he looks like a cross between a Geico caveman and the fake terrorist disguise used by Team America: World Police.

It doesn’t help that he possesses the personality of a dead fish, and you understand why his wife, Kitty (Addams), is looking elsewhere for entertainment. Because Dr. Jekyll spends all his time locked up in his lab, working on drugs which will allow “the control of every resource of the human personality.” He believes everyone is comprised of two inner forces, in a perpetual struggle for supremacy: “man as he could be” and “man as he would be”. He has found a compound capable of suppressing the former and giving full rein to the latter, leaving the subject “Free of all the restrictions society imposes upon us. Subject only to his own will.” 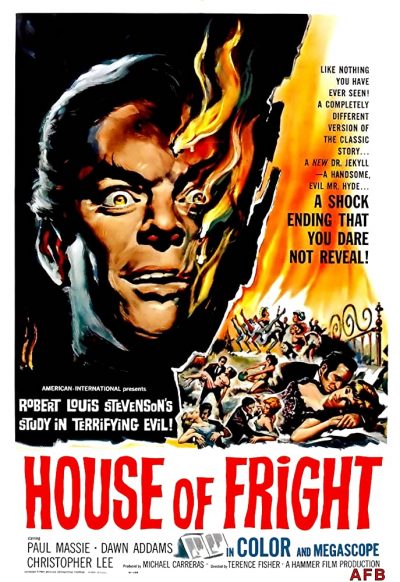 After Kitty spurns his request to spend a night at home, Dr. Jekyll doses himself and, as I’m sure everyone expected, turns into Mr. Hyde. Who turns out to be considerably more interesting than his alter ego. He heads out on the town to the infamous Sphinx, an establishment which combines a cabaret and a bordello, which is a bit awkward. For rather than the supposed upper-class social soiree she was supposed to be attending, Kitty is there, with her lover, Jekyll’s pal and all-round Victorian douchebag, Paul Allen (Lee). As well as bonking his pal’s gal, he’s a gambling addict, who has been mooching off Jekyll to cover his debts.

Hyde joins them, and we soon get a taste of the violence in his nature, when he pounds a pimp into unconsciousness, and only Allen’s intervention prevents a worse fate. [No-one at the Sphinx seems to care, which gives you an idea of the kind of place this is] Amusingly, the pimp is played by Oliver Reed in an uncredited role. From a modern perspective, I can’t help thinking he’d have made a better Jekyll/Hyde than Massie, though did tap his inner animal for Hammer and Fisher, in the following year’s Curse of the Werewolf. Allen and Hyde team up, for a quick tour through all the salacious entertainment London can offer.

That includes smoking opium and Hyde hooking up with the Sphinx’s Hispanic star and contractually obliged Eurototty, Maria. She’s played by Norma Marla, who had done promo work in the US for The Mummy, but whose only other credit was Hammer’s comedic version of the same story made the previous year, The Ugly Duckling, with Carry On regular Bernard Bresslaw as Henry Jeckle. Anyway, from here, things unfold more or less as you’d expect, with Hyde gradually encroaching on Jekyll’s life, and trying to pull Kitty away from Allen. It’s never made clear how much of what Hyde does is remembered by Jekyll; it appears to be little or nothing, but the doctor seems remarkably unfazed what should be yawning gaps in his memories.

Eventually, Hyde concocts a plan to take over entirely. He stages a fire in Jekyll’s lab, leaving another body there and setting it up so it looks like the doctor took his own life. Initially, the ruse seems to have worked with the inquest pronouncing Jekyll’s death a suicide. However, Dr. Jekyll makes an unexpected public re-appearance at the last minute, leaving him with a lot of questions to be answered. It’s an unsatisfying ending to an unsatisfying adaptation, which manages to blow the central concept by making Mr. Hyde considerably more interesting and appealing than the doctor. Sure, there’s the “violent outbursts of rage” thing. But which of us hasn’t caused the demise of at least one of our friends, by locking them in a room with a poisonous reptile? Otherwise, he seems a fine bloke with which to have a drink or ten. 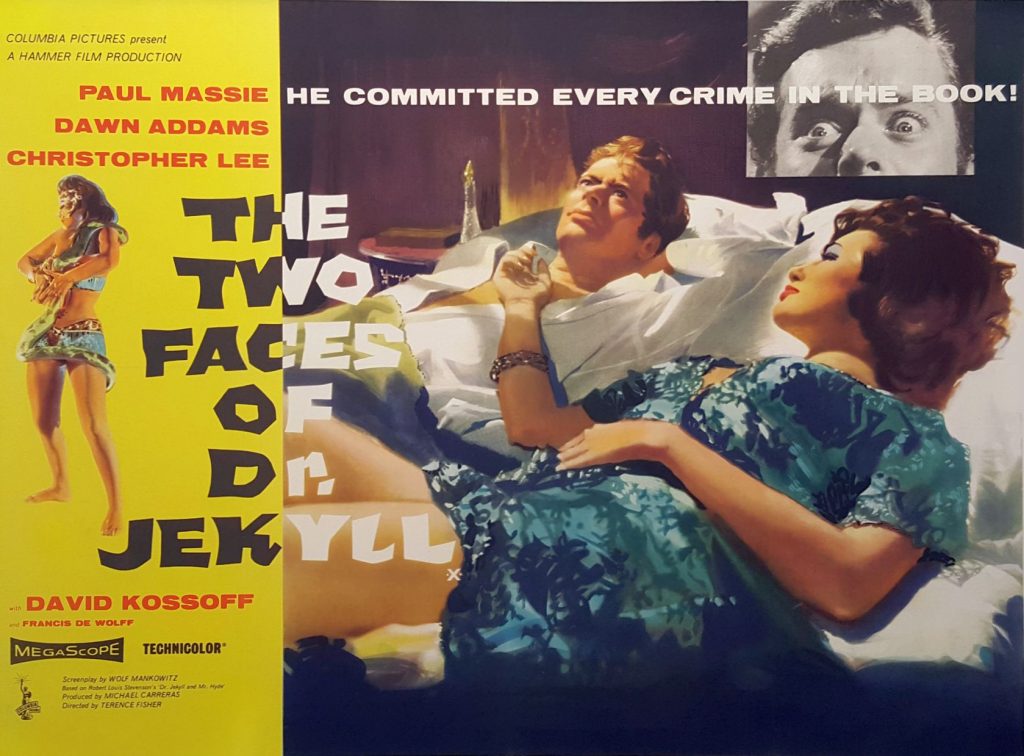 It comes off as mean-spirited, given the complete lack of likable or sympathetic characters. The term “bitch” pops up more than once, which seems a bit rough for the era, and Hyde calls one of the tarts at the Sphinx a “fourpenny whore”. When he offers to trade settling Allen’s debts for Kitty’s affections, he sneers derisively, “Why not sell what you have so often given away?” London appears populated almost entirely by people interested purely in hedonistic delights, or those who prey upon them without compunction, and unlike Baron Frankenstein, there’s little or no sense of a higher purpose which might be motivating Dr. Jekyll. Quite how humanity would benefit from his research remains opaque. As his friend, Dr. Litauer (Kossoff) says, “Can you not take a violent creature and, with some opposite drug, transform it to its higher nature?” But where’s the plot there?

This feels not dissimilar to The Man Who Could Cheat Death, which also had Lee in the rather unexpected boyfriend role. It’s a bit less stage-bound, and there is some spectacle. The Sphinx is more a theme-park than a club, apparently with a hotel attached. It provides an acrobatic dance number, and a glass ceiling which, as soon as you see it, you just know someone will plummet. It doesn’t disappoint there. In just about every aspect though, it falls short, and I can certainly understand why it was neither a critical nor commercial success. It would take more than a decade before Hammer would eventually return to the story, gender-swapping things up with Dr Jekyll & Sister Hyde.