Is it possible for a film to be too understated for its own good? That might be the case here, with a title and poster which seem almost willfully to avoid revealing much, while remaining technically accurate. Yes, it’s about a dinner party, and the poster will make more sense after seeing it – or maybe even after reading this review. But neither quite do the product justice, and in a world where a film has about two seconds to grab your attention before you scroll past to the next streaming offering, that’s a shame. It is undeniably a small-scale product, with one location and only four actors. Yet that may work to the movie’s advantage, since there’s no escape from the steadily-increasing emotional pressure-cooker this creates. 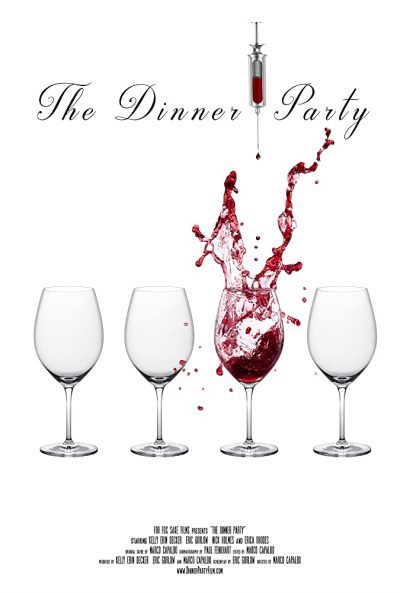 Sina (Decker) is preparing for the arrival of her dinner date: pots are boiling, place settings arranged and everything will be just so. But from the moment we see her doctoring the dessert with a hypodermic syringe (top), it’s clear something is very, very off. A knock at the door throws Sina’s careful preparations awry. For it’s not the expected guest, but her brother, Calvin (Gorlow, who also wrote the film’s script) and his “girlfriend” – quotes used advisedly – Bridget (Rhodes). They’ve popped round to see Sina and when the date, Jack (Holmes), shows up moments later, he insists they stay, much to Sina’s annoyance. Will her plan be derailed? And what is her plan, anyway?

You won’t necessarily get all the solutions, and I’m not sure there are “right” answers to be found, since you have to pick apart people’s motivations from their words/deeds. It acts almost like a Rorschach test: how you view the characters may say as much about the viewer as about them. It’s clear Sima has an unhealthy obsession with Jack, a poet whose work Sima intends to publish and to whom it speaks an intense message. It may just not be the message Jack intended. And as Sima says at the very start, “‘Obsession’ is a word used from an outside perspective, when a creature has found its meaning, a meaning so separate from the understanding of others, so specific, that the others are forced by their reeling minds to deem it ‘unhealthy’.” So: insane, or differently sane?

The script doesn’t commit in either direction; according to Gorlow, “The story is not supposed to explain or judge anything, just observe a unique situation.” This is a double-edged sword. It’s certainly less judgmental, and a refreshing alternate to the usual trope (much though I enjoy a good “bunny boiler”!). Yet neutrality in the face of lethally malicious behaviour like Sima’s is hard to justify from a moral perspective. Her motivations and some actions are also perhaps too opaque; I didn’t initially realize her attempts to drug Calvin and Bridget were intended only to make them ill enough to leave, mistakenly seeing some kind of small-scale Jonestown incident.

As you can imagine, you need to be prepared to shoulder some of the work here, and be satisfied with a film which asks more questions that it answers. If you treat this as merely a passive experience, it’s not going to work as well. Yet if you give it a chance, you may end up asking yourself the same questions post-viewing, and it should provide a topic or two to chew on over dinner. Probably best with someone you trust very much….

[The Dinner Party is out now, through Amazon Prime]