Errol Flynn and Fidel Castro: name a more iconic duo. I’ll wait. Er, what? The Hollywood master of swashbuckling and the communist Cuban dictator? Surely some mistake. But, no. Flynn had been a regular visitor to the Caribbean island in the fifties, often using it as a stop-over on the way to his estate in Jamaica. By the end of the decade, his film career was heading sharply downward, his reputation shot thanks on on-screen flops and off-screen scandals. In 1958, he arrived in Havana as a reporter and was granted an audience with then rebel leader Castro. The actor was won over, became a supporter of the popular struggle against President Batista, and as a propaganda contribution to help the bearded one improve his image in America, made this weird cross between a documentary and an action film. 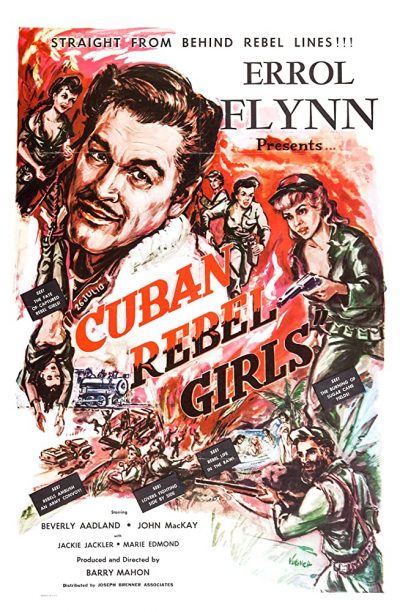 It stars his teenage girlfriend Aadland – those “off-screen scandals” for Flynn, included a trial for statutory rape in 1943 – in her only credited role. She plays American teenager Beverly Woods, whose boyfriend Johnny (McKay) has gone off to fight with Castro’s revolutionaries. Her pal Jacqueline is involved in smuggling guns to the rebels, and Beverly goes along on a delivery, looking to meet up with Johnny. Initially, she has no interest in the fight, caring only for her boyfriend. But inevitably, she is won over by the honest struggle of the proletariat, and becomes a true believer. In one of the sections that’s more documentary than drama, she ends up riding into Havana on a tank in a parade with the victorious Castro army.

Flynn, meanwhile, plays an American journalist, whose largely unnecessary narration is dropped on top of proceedings. That aspect isn’t actually too bad: his voice still commands a certain attention. But when he appears on the screen, the illusion of a cinematic idol is shattered by the sleazy version of Alec Baldwin which shambles into view. It and similar Flynn production Cuban Story (lost for 50 years) certainly rank alongside Plan 9 From Outer Space as among the saddest final feature films of an iconic actor’s career. If this has value, it’s almost entirely as a time-capsule, and a rare example of Hollywood making a pro-Communist film.

For it didn’t take long after World War II ended, for Russia to go from ally against the Nazis to existential threat to America. Hollywood quickly followed suit, the fifties giving us the likes of I Was a Communist for the FBI and Invasion U.S.A. This is arguably even worse than any of those ‘Red Scare’ films, and certainly no less subtle in its messaging. The lack of talent across the cast is painfully obvious. and outside of Flynn, it doesn’t appear anyone else had movie experience – some seem to have been actual members of Castro’s forces. Even director Mahon was making his debut, though unlike everyone else, he did go on to have a career. Well, of sorts. His filmography includes such titles as The Diary of Knockers McCalla and Fanny Hill Meets the Red Baron.

If you think of this as a porn film without any actual sex, it’ll go a long way to explain the wooden performances and leaden dialogue. The worst thing is easily its lead actress. Aadland is so bad, she’ll turn any viewers into a fervent anti-Communist with her petulant whining. “But I won’t get to see anything!” she bleats, after being stuck on lookout duty. “When am I gonna see Johnny?” With rebel girls like that, it’s a miracle Castro ever won. Yet this finishes with him somehow prevailing, and Flynn boozily telling the camera, “Well, I guess that winds up another stage in the fight to rid Latin America of tyrants and dictators.” Oops. Not exactly a statement which aged well.