Another of the lesser-known Hammer films, this psychological thriller is almost an epic. Typically, their movies were briskly-paced, lasting at or under the 90-minute mark. This is one of their rare entities to crack three digits, originally 108 minutes, though cut by a quarter-hour for the American release (as well as given the considerably more lurid alternate title!). On balance, it likely doesn’t need to be that long, and could do with significant tightening in the middle section, before redeeming itself with a solid final act. Interesting, however, to note the absence of any reference to Hammer in the credits, it being produced through their Falcon subsidiary.

It opens effectively, depicting the aftermath of a head-on collision between a sports car and a truck, the latter on the wrong side of the road. The passenger, Denise Colby (Cilento) has been thrown from the car, but is largely unhurt. The driver, her husband David (Lewis), was not so lucky, and is slumped unconscious over the wheel. The couple had just got married, and were on the way to their honeymoon in the south of France. A year later, they finally get to make that trip, David having recovered from his injuries. Well, at least physically. Mentally, he seems to be suffering from PTSD and/or post-concussion syndrome. While remembering nothing of the accident, he can now only drive at little more than walking speed. As a racing driver, this is a particular source of anguish for David. 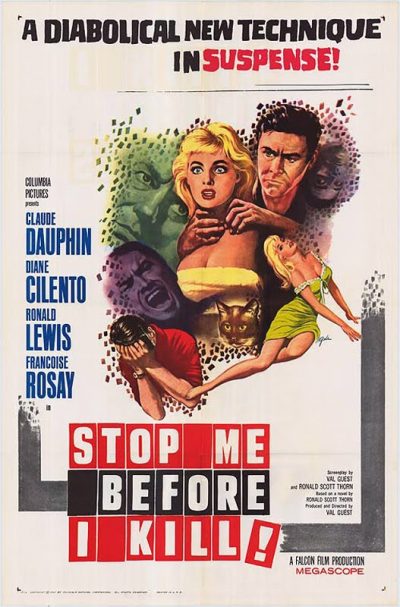 However, more concerning are the violent surges of rage he feels, apparently triggered by moments of intimacy with Denise. David has come perilously close to acting on these, and is perpetually worried that he will follow through to a lethal conclusion. While on the French Riviera, they meet Dr. Prade (Dauphin), to whom David takes a swift dislike. Denise though, feels the psychiatrist can help her husband return to who he used to be, and brings the two together – not always keeping to the most honest of tactics. That continues on the couple’s return to London, with the doctor following shortly thereafter.

The sessions with David concentrate on the gap in his memory, Prade believing the accident holds the key to the patient’s personality change, and be also explores the grisly details of David’s urges to kill his wife and dispose of the corpse. After supposedly being “cured”, in a harrowing session involving what seems to be a carbon dioxide based version of waterboarding, David wakes up to find no trace of Denise. Worse still are the increasing signs he may have carried out his murderous fantasies, without remembering it. But are the doctor’s motives entirely pure? David suspects Prade may be manipulating him – though this paranoia could just be another symptom of his mental fragility. So does he need help or revenge?

David makes for a thoroughly unlikable “hero.” Maybe it’d be different if we’d known him before the accident, but the post-crash version is severely bipolar, swinging from jealous and irritable to over-affectionate in a heartbeat. His hair-trigger temper and fondness for violence becomes apparent within minutes of arriving at Prade’s dinner-party, punching the doctor out in the belief a discussion about spider behaviour is a personal attack on him. You really wonder why Denise stuck with her husband, rather than having him hospitalized for the treatment David clearly needs. Perhaps the character might have been more sympathetic if Stanley Baker had played the part, as was originally planned? Or maybe the novel on which the film was based, written by Ronald Scott Thorn, was better there [the protagonist in the novel was a theatrical agent rather than a race-car driver].

Additionally, the film shows its hand too early in a couple of ways. There’s a scene which should set alarm bells off in the viewer, with Prade spying on Denise skinny-dipping, giving us Hammer’s first US/UK release nudity, albeit in blink-and-you’ll-miss-it form. [Some versions include a scene of her in the bath. This triggers another of David’s violent episodes, and does help his subsequent dinner-party over-reaction make sense] There is also a blatant example of Chekhov’s Gun – or rather, Chekhov’s Cable Car, in the one running from the French hotel down to the beach. We even get dialogue about how badly-maintained it has been. You spend the rest of the film waiting for the other shoe to drop, and the conveyance to become relevant again. It does, though not until the very final scene. 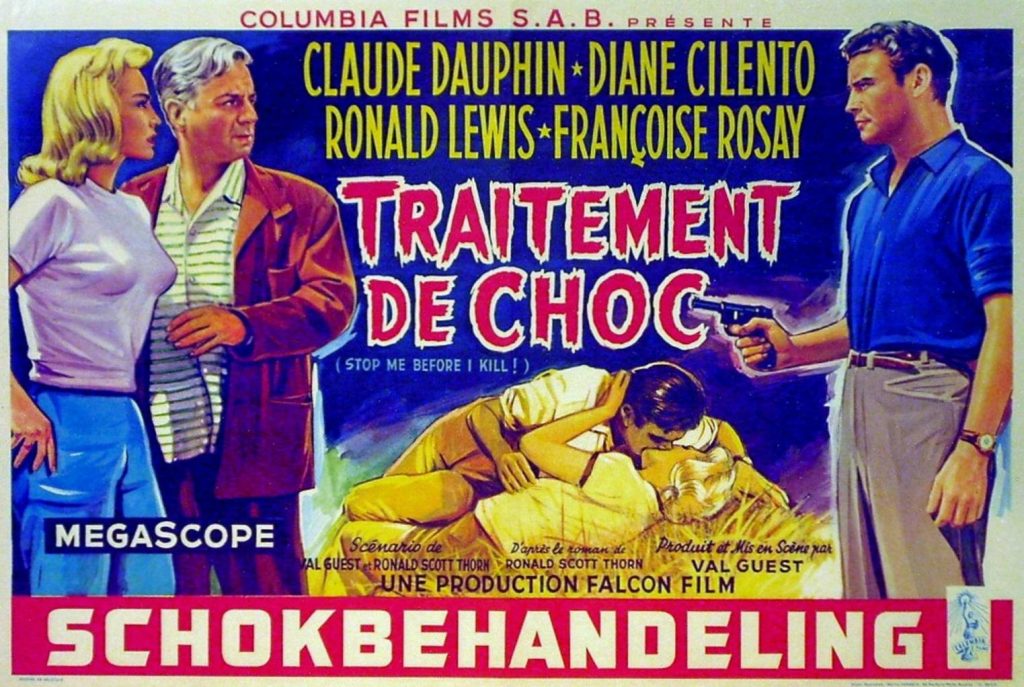 Worth noting, despite her French accent and Italian dialogue, Cilento is faux-Eurototty, actually being Australian. [Though worse is present here, the dinner-party having what seems to be full-on blackface from Canadian actress Barbara Chilcott] Cilento would go on to marry Sean Connery, be Oscar-nominated for Tom Jones, get to do another accent – this time Scottish, playing Miss Rose in The Wicker Man – and marry its writer, Anthony Shaffer. While we’ll see Lewis again down the road in other Hammer films, most notably Taste of Fear, his career never took off in the way it might have done. He ended up committing suicide in the early eighties, after being declared bankrupt.

The film only really gets going at the finish, when we are made to wonder whether or not David has murdered and dismembered Denise. The script manages to walk that knife-edge quite effectively, and my opinion on the matter changed direction more than once before a final decision became clear. It does also make good use of its French locations, and reminded me of The Snorkel in that regard. Overall though, it’s too sluggish to be regarded as completely successful, and it’s easy to understand why this has been largely forgotten. Perhaps its main purpose it to offer a signpost towards Hammer’s slew of psychological thrillers which would follow later in the decade, many of them covering similar territory to better effect.