The above grade likely depends on you being familiar with the genre of Mexican wrestling films which this aims to imitate. If you’ve not seen movies like Los Canallas or Santo y Blue Demon Contra el Dr. Frankenstein, this will probably seem perilously close to the bottom of the barrel. But knowing what it’s trying to do, even if largely unsuccessfully, makes me more sympathetic. Here, the hero is Azteq (Palomino), a luchador who never takes his mask off. He fights the bad guys, both inside and outside the wrestling ring, and is about to face his stiffest test yet, going up against the Prowler (Knox), a serial psycho who has been abducting attractive blondes from a local stretch of forest. When one of his victims is Azteq’s girlfriend (Ryan), he teams up with local detective Chris Longley (Hudspeth) to search the woods. 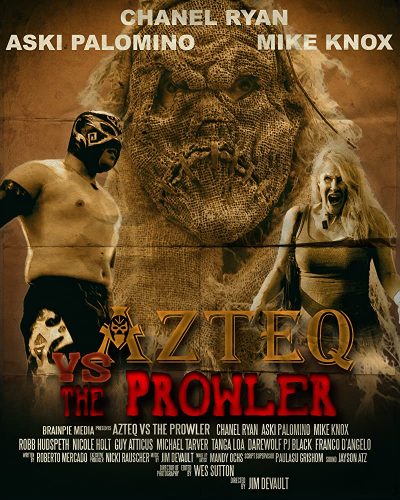 The main problem is it works better as an indie wrestling film. Or perhaps more accurately, is almost entirely terrible as a horror movie. Knox is a former WWE wrestler – before that, he used to fight here in Phoenix – and at 6’6″, has the necessary physical presence. I also liked the tuneless humming as the Prowler went about his stalk ‘n’ slashy business. But any positives are completely wasted, with a backstory which makes little or no sense, and actions that are illogical. For instance, he kills every male person he comes across… except for Azteq and Det. Longley who are conveniently tied up and brought to his lair. The deaths are also almost embarrassing, the makers not having realized that even terrible practical effects are far better than bad CGI. And if you’re going to have long make-out scenes by impending victims, the rules of the genre require you to provide breasts.

The sequences with Azteq plying his trade as a wrestler are better, not least a fight against Tsunami (Tyrone Evans, another ex-WWE guy). There’s also a decent scene where he talks about the significance of his mask to Det. Longley, possessing a genuineness to it that’s quite effective. However, to be in line with its Mexican ancestors, they needed to do a much better job of establishing his creds as a tecnico (good guy): one mugger doesn’t cut it. And after an opening spot of narration, talking about the Aztec god of warriors, Mixcoatl, I  expected considerably more mysticism mixed in with the wrestling, like Lucha Underground used to do. It doesn’t happen.

I was also highly disappointed by the final confrontation with the Prowler. With both men having plenty of in-ring experience, I wanted something like a low-budget version of the Boneyard match between A.J. Styles and the Undertaker from Wrestlemania 36. Give us a 20-minute hardcore brawl, the participants crashing through walls and off things, Azteq eventually prevailing through his skill and determination, and I’d have left satisfied. Instead, after not much more than a few kicks to the balls, Azteq shoots the Prowler with Longley’s gun. Really, that’s not very tecnico, now, is it?