This almost doesn’t qualify as a movie, with a scant 63 minutes passing before the closing credits begin to roll. It’s not often I find myself thinking a film needs to be expanded – a far more common complaint is that trimming is warranted – but this may be of those rare cases. For, given the length, it takes too long (basically half the movie) to get to the meat of the matter: it’s a very engaging idea, and a shame it did not arrive earlier, in order to permit greater development. Instead you get young teenager Sam (Pope, presumably the director’s daughter?) bickering with her single parent Dad, getting grounded and still taking part in a late-movie session, watching a horror movie entitled There’s Something in the Lake, during which she and her friends fall asleep. 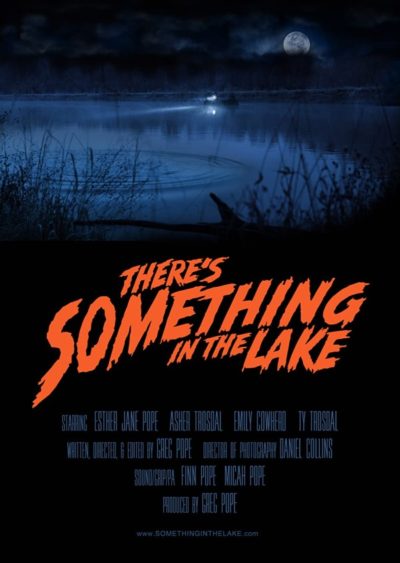 The following day, she finds things are kinda weird, e.g. her school textbooks are blank, She doesn’t realize how weird, until she is door-stepped – technically, window-stepped – by Evan (Asher Trosdal), who has discovered the kids who watched the movie have “fallen through” into a parallel reality inspired by the film. Humans like the school PE coach (Smith) are… not human, as can be seen through the lens of Evan’s camera (top), in a nice They Live nod. There is now, indeed, a monster in the local lake. Getting back to their world requires them to kill it; yet the non-humans want to turn Sam and her pals into them, and in this universe, her mother is still alive; so does she even want to leave it?

It’s a remarkably complex and sophisticated idea for a low-budget movie: it feels more like something Christopher Nolan might use, likely spending three hours and $160 million on it. Pope doesn’t have either the time or the resources, and so it feels like the concept isn’t able to get the justice it deserves. In addition to They Live, other elements are a throw back to older paranoid cinema, such as the original Invasion of the Body Snatchers, and the titular creature looks inspired by Swamp Thing. There’s also the Stranger Things trope of teenagers vs. paranormal bizarreness in an earlier, nostalgic time. Yet the end product manages to be its own beast, rather than feeling like reheated left-overs, with elements such as a creative use of orange soda.

The performances are probably the weakest elements. Child actors tend to be too obviously “acting”, and the main takeaway here is how good the ones in Stranger Things are by comparison. Pope is the strongest, yet even she has moments where it feels obvious she is saying lines someone else has written for her. It does feel this was intended for a younger audience, with the horror elements here definitely on the milder end of the scale. However, no-one here is talked down to, and despite a few rough technical aspects (the audio mix is… not good), this helps make it a decent enough viewing experience for adults. You probably won’t fall asleep, at the very least.