I was drawn to this by the synopsis: “After the U.S. is divided in a civil war, the remaining citizens fight it out and attempt to survive in the desolate, lawless Wild West.” I guess it’s technically not lying about any of that, but I was kinda expecting more than a cast of roughly eight, running around an admittedly quite photogenic forest for the majority of the running time. The “civil war” barely rates a mention, beyond an off-hand reference to bombs being dropped. Who was fighting who, and what the outcome might have been, are clearly not going to be on the end of term test. But given the limited population, whatever happened appears to have been highly lethal. 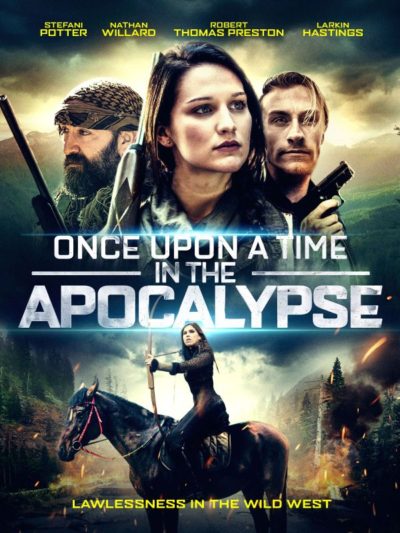 Among the few survivors are Evie (Somers) and her father (Willard), who have been extremely cautious ever since Mom was killed by a home invasion, relatively early in the post-apocalypse. Evie takes a neo-pacifist approach to survival, and is appalled when Dad guns down someone who approaches them. Hey, he was carrying a gun – no jury in the land (or what’s left of it, anyway) would convict. She decides it’s time to head off on her own, and encounters Drac (Preston), who professes to be the nearest thing left to law in these parts. You’d think previous experience might have left Evie a bit skittish about putting her trust in a complete stranger.  Apparently not, and that turns out to be a big mistake.

Initially, this isn’t so terrible. I genuinely liked the way Drac was introduced, setting him up as a good person by having him take out three thugs who have kidnapped a woman. Except, it turns out he only wanted the woman for his own purposes. It’s a nice switch. Unfortunately, that and some lovely landscapes, reasonably well-photographed, are about all this has to offer. The entire movie falls apart after introducing some kind of monastery, which it appears has finally decided it’s time to take on Drac. He’s about to deliver Evie and his other bits of post-apocalyptic totty to a warlord. The plotting is poor, with it often being hard to work out who is doing what, and the performances from these new characters are straight-up terrible.

The title appears to be making a kind of nod toward Sergio Leone, and certain shots lean in that direction, especially in the stand-offs. In many ways, this is much more a Western than science fiction or dystopia drama. Just lob a few ten-gallon hats onto the participants, and replace the (remarkably well-preserved) cars with ponies; you’d have something which could be straight out of the seventies. The problem is, there’s not a single aspect of this which deserves to hold Leone’s sweaty jockstrap. It’s a comparison where there is ever only going to be one winner, with Apocalypse trailing a long way behind, and in last place. Once is definitely enough times to sit through this.