The murky world of late nineties policing in Rio de Janeiro already gave us one stone-cold classic, in Elite Squad. I came into this hoping for something similar. Sadly, it’s more like the “We have Elite Squad at home” of Brazillian police movies. The shape is similar; it just doesn’t possess the same flavour. So perhaps the Diet Pepsi of Brazillian police movies might be a better way to put it. It takes place in 1997, when a wave of kidnappings – about one every three days – hit the city. The heat is on after the latest victim is the daughter of a leading politician, and Rio’s “finest” are transferred to the unit in charge of the investigations. 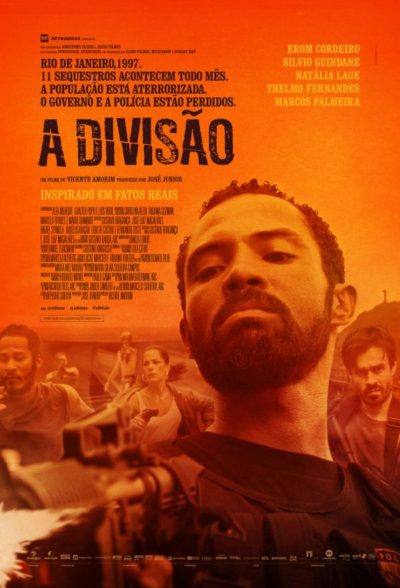 Quotes used advisedly, as they include Mendonça (Guindane), whose suspects are quite likely to turn up dead, and Santiago (Cordeiro), who along with his cronies Ramos (Fernandez) and Roberta (Gerbelli), are as corrupt as they are smart. In a case like this though, when results are more important than the methods by which they are obtained, the philosophy becomes “by any means necessary.” Mendonça and Santiago are just the people you want, providing you’re prepared to look the other way, and bury whatever unpleasantness results. For example, the growing evidence that the kidnapper is a former police officer, who is getting help from inside the law. And where exactly is the money from all the ransoms ending up?

There are sections in this that work particularly well. For example, the smart way in which they force the kidnappers to use a specific pay-phone – basically, by vandalizing all the others in the area. Or the scene were Santiago walks into the middle of a firefight in the slums (top), to calm things down by getting the criminal boss to hand over the suspect Mendonça wants. However, these are the exception rather than the rule, and much of this is simply occupying the murky world where the forces of politics, the law and the criminal underworld overlap to their mutual benefit. It feels as if there’s quite a lot here which, while perhaps obvious to a local audience, could have used more explanation for the benefit of the overseas viewer.

At 134 minutes, it’s only about twenty longer than Elite Squad, yet it definitely feels more of a slog. This may be related to there being only one case here which is being investigated, leaving proceedings without much sense of escalation. There’s really only two ways this can end, after all: the victim is either rescued, or is going to turn up dead. To be honest, I never felt particularly invested in the outcome, either way. While Mendonça and Santiago made for an interesting contrast in policing styles, the film needed someone equally strong on the other side of the law, to act as a foil for them. The lack thereof leaves things unbalanced, and the conclusion lacked anything much in the way of impact.