Alternative title: Carrie Goes to College. That’s a decent elevator pitch. For you have Thelma (Harboe) heading to the big city to study, her first time away from a strongly religious father, Trond (Rafaelsen), a doctor, and her disabled mother Unni (Petersen). We know something is off with her from the opening scene. It’s a flashback to when Trond took the 6-year-old hunting in the nearby woods, only to turn his gun on his daughter, though he proves unable to go through with it. At university, Thelma meets and falls for Anja (Wilkins), causing her to experience new emotions. When things don’t go quite the way she hoped, Thelma begins to experience strange incidents, as her long repressed paranormal talents bubble up to the surface once more. 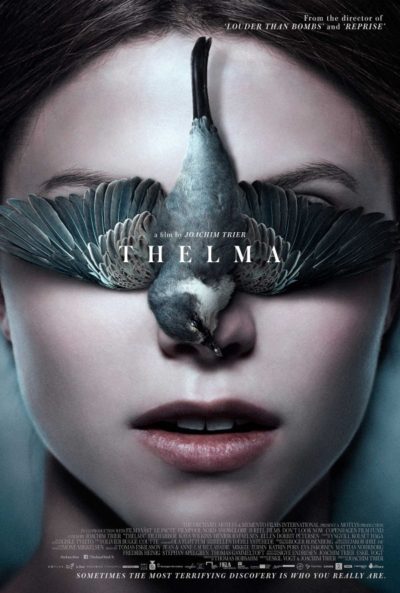 It’s all considerably more understated than the Stephen King/Brian De Palma movie. No pig’s blood, prompocalypse, flying kitchen utensils or hands shooting up from beyond the grave here, though we do get some lesbian canoodling. We don’t even see the true extent of Thelma’s psychic abilities until the half-way point in the film, in another flashback scene that is all the more chilling for the sense of childlike innocence. You really feel she was not responsible for her actions, which makes her parents’ subsequent behaviour understandable. In contrast to Carrie though, religion here is portrayed in a much more benevolent way, as a tool which offers a moral foundation to help Thelma restrain her potentially lethal talents. Well, along with large quantities of strong, anti-psychotic drugs, anyway.

I was reminded of a quote used in another recent film: “If there is no God, everything is allowed,” and initially it feels as if the movie is an indictment of modern corruption and lack of a moral compass. Yet the ending suggests an alternative “treatment”, one based more on love than theological repression, though the long-term success of this approach is left uncertain. It is definitely a more optimistic outlook than the one offered by Carrie. Getting to that does take a while, especially before the point, mid-way through, where the pieces of the jigsaw puzzle are assembled, and you realize even Thelma doesn’t appreciate the power she has inside her.

While there are only a couple of sequences where you get an idea of what that entails, these are effective. One in a boat is particularly well done; just when you think it’s over, it isn’t. If the plot is strong, the performances are a bit bland, especially Harboe as the title character, where there’s not much in the way of personality to her. To some extent, this makes sense, given the sheltered upbringing. Yet I’d be hard-pushed to tell you one definitive thing about what Thelma was like as a person, and this caps the film’s effectiveness. Special nod to Ola Fløttum’s electronic score, which seems at points to have drifted in from an early David Cronenberg movie.