In many ways, this feels almost like a remake of The Stranglers of Bombay. Both are period pieces set in a British colony, in which an English hero goes up against a dark organization that is spreading terror in the local population. They have a mole inside the empire’s organization, and the East India Company seems more involved in proceedings than I feel they should be. There’s also the same problem – likely even worse here – of using white actors to play ethnic roles. This isn’t something which typically bothers me. I couldn’t care less that Scarlet Johansson starred in Ghost in the Shell. But there are so many examples of it here, I can’t help wondering, did no-one at Hammer ever stop and think, “Hmm, maybe making a film set in Hong Kong isn’t such a good idea.” The effort involved in this volume of yellowface would seem entirely counter-productive.

There’s only one Chinese actor even listed in the opening credits: Burt Kwouk, who’d later go on to become famous as Inspector Clouseau’s kung-fu butler Cato in the Pink Panther franchise. Growing up, he was pretty much the sole Chinese actor I saw on British TV until The Chinese Detective came out in 1981. Here, he is the very last name mentioned, and his character doesn’t even last ten minutes before getting killed off. Let’s go through the rest of the actors, and review their racial credentials. The blatant yellowface are in bold, the “somewhat” yellowface are in italics.

I saved the best and biggest for last, naturally. That would be star Christopher Lee, playing the head of the Red Dragon tong, Chung King. Reportedly, he had just come back from holiday in Italy, and the nice tan he sported, gave the make-up department fits. This was the first, but certainly not the last time Lee would don an Oriental mask. Most famously, he would play Fu Manchu in a non-Hammer series of five movies, beginning in 1965. Including him, of the 12 credited actors, we have more than half wearing yellowface to some extent. What’s odd – though not necessarily a bad thing – is few if any of them attempt to change their accents. Lee, in particular, could be recognized with your eyes closed, such as when he sonorously quotes Omar Khayyám.

Lee’s presence definitely gives the tong more weight than we got from the bad guys in Stranglers of Bombay. It’s easy to see why he commands such loyalty from the group’s members, to the point of being willing to go on suicide missions for him. There are a couple of other ways, beyond Lee’s presence, in which this is slightly better than Stranglers. While still rather close to the “white saviour” trope, the locals are given more agency, with the Liberators proving key in rallying the non-tong population to take on the organized crime gang at the end. Indeed, their leader proves quite adept at manipulating Captain Sale. He uses the fact Sale’s defiance of the Red Dragons, despite the personal risk which results, is becoming a rallying point for local opposition. And Lee proves more energetic than the typical Euro-totty – though here, Fauxriental-totty is closer – saving Sale from tong attack on more than one occasion. 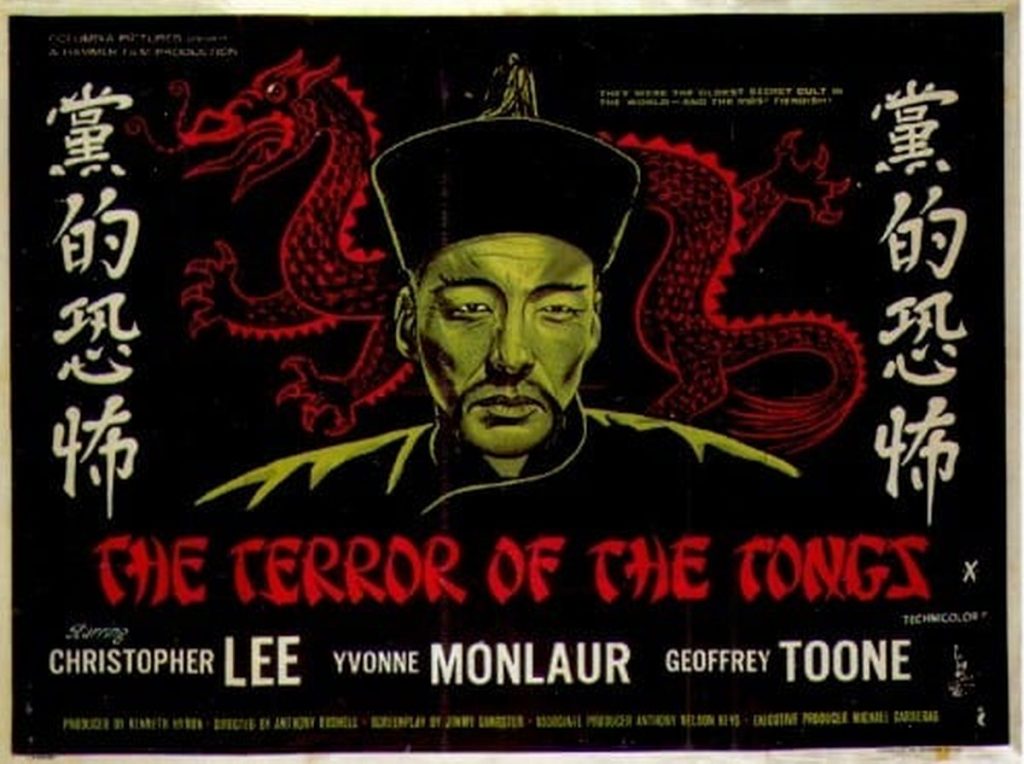 But the big problem is the hero. Part of the issue is a script which doesn’t give him enough to do. Sale’s investigative technique consists largely of running into tong properties, to beat up low-level minions while yelling loudly in English at them. It’s just not very interesting. However, an equal flaw is that, when he does get something to do, Toone’s performance isn’t up to it. The most obvious example is the death of his daughter, which you’d think would reduce anyone to a wreck. Indeed, it needs to do so, in order to set up Sale’s subsequent quest for revenge through the Hong Kong underworld. Instead, he responds with a near-total lack of emotion, as if Helena had brought home a B-minus on her report card. Lee’s puppy-like devotion to him is entirely inexplicable too, considering that rather than him rescuing her, as noted above, she saves him from taking a tong bullet.

It may be significant that it is Lee (Christopher the actor, not Monlaur’s character!) who gets top billing, and is the only one shown on the poster above – even though his screen time is considerably less than the hero. You could equally say the tong leader’s role is no less underwritten than Captain Sale’s, and I’d like to have seen the film strike a better balance between the two. They literally do not have a single scene together until the very end of the film, when it might have been more fun to make it a personal battle. Alternatively, the complete ineffectualness of the Hong Kong police force becomes a little wearing as well, so having him team up with Inspector Dean. There are so many ways this could have gone, it’s almost impressive they managed to choose just about the least interesting one.