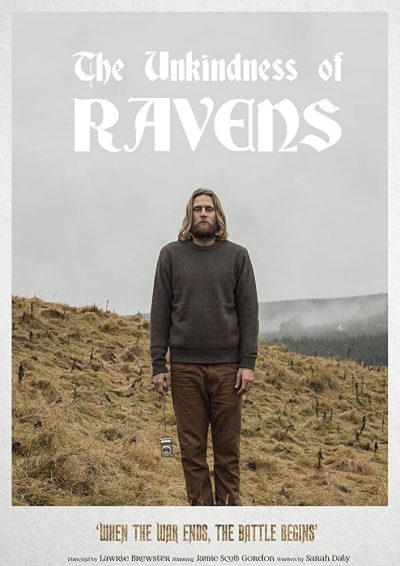 Andrew (Gordon) is an ex-soldier who is currently homeless and living on the streets of Edinburgh. [Despite this, he seems to have a nice digital camera and a laptop. You get a better class of tramp in Edinburgh, I guess] His social worker/therapist Angels (Gilliland) decides what he needs is to get out of the city, and arranges for him to stay at a friend’s house in the Highlands. Because what every mentally disturbed veteran needs is to be left alone for a month, with nothing but his thoughts, flashbacks to the carnage he witnessed in the Middle East and a book about the subject of his phobia, ravens. We rapidly concluded Angela is a bit of a shit therapist.

In equally short order, Andrew starts seeing shadowy figures on the edge of his vision. As his time in the wilderness proceeds, these hallucinations increase both in frequency and intensity, with a soldier version of himself also turning up to chat with him. Andrew v2.0 explains the dark figures are raven warriors, who have come to feast on Andrew v1.0’s eyes – but only once his soul has been destroyed. With Angela’s phone assistance proving about as useful as the rest of her advice, will he be able to make it through the darkness and out the other side? Or will Andrew end up becoming just another one of the soldiers destroyed by their past?

Gordon does yeoman’s work here, being present in virtually every scene and crafting a figure which is troubled yet sympathetic. Admittedly, in the latter stages, his performance largely takes the form of increasingly manic face-pulling, and things are probably better – certainly, more coherent – when he is in conversation with himself. There are nods to films ranging from Apocalypse Now to A Nightmare on Elm Street, possibly even including Hellraiser II, with the scrawling of a plea for help in blood on a wall. Yet you’d be hard pushed to call this anything other than entirely its own creature, and credit is due for that, despite the aspects which fall short of being successful.

It ends in a way which is both surprisingly low-key and optimistic, considering everything that has gone before. Let’s just hope no other former soldiers get assigned to Angela, who is probably the worst cinematic advertisement for the National Health Service since Carry On Doctor.