Turns out, getting a movie based on a drunken viewing of its trailer is sometimes not a wise idea. That’s how we ended up watching this, and we were only three minutes in, before I turned to Chris and said, “I appear to have made a terrible mistake.” This is a startlingly ill-conceived and poorly-executed slab of eighties cheese, which – like every other film in which Zadora starred – was largely financed by her multi-millionaire husband Meshulam Riklis. They met when she was seventeen and he was three decades older; Anna Nicole Smith was clearly in the corner, taking notes.

The first product of their “partnership” was Butterfly, starring Zadora and Stacey Keach. Universally panned as terrible, she “won” the 1983 Golden Globe Award as Best New Actress of the Year in 1982. Quotes used since there was much controversy over this, due to Mr. Zadora having lavishly wined and dined the Hollywood Foreign Press Association who decide the winners. The award – taken home the previous year by a German bird called Natasha something – was discontinued shortly after. Subsequent Zadora films, Fake Out and The Lonely Lady, proved no more successful. I have seen the latter, a potboiler based on a Harold Robbins novel, and remember only the bit where Zadora’s character gets raped with a garden-hose nozzle. 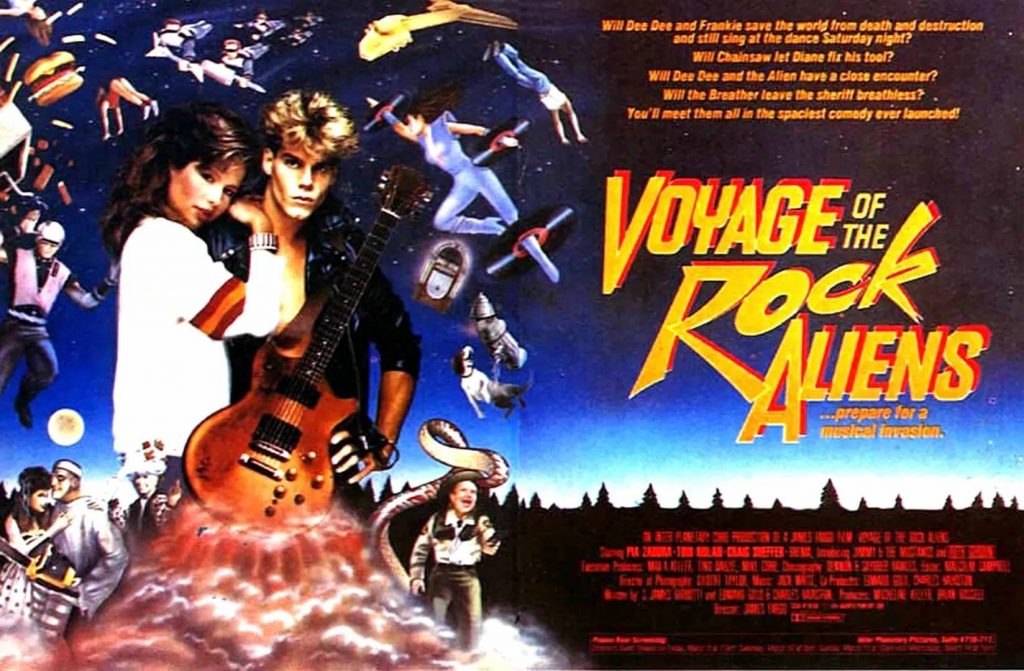 That brings us to this film, which does much the same to my beloved memories of the eighties. Perhaps it was just ahead of its time. For much the same concept, of goofy aliens coming to Earth and falling for a local gal in a musical pastiche, worked very well for Earth Girls Are Easy, four years down the line. And you have to wonder if the “phone booth as transport” idea inspired Bill and Ted’s Excellent Adventure, also later in the decade [though, of course, Doctor Who snorts derisively at both of them]. Still, even given the benefit of this significant doubt, the results here are so dire as to make me deny completely having lived through the decade.

The concept has five aliens, led by ABCD (Nolan, a child star of the sixties), searching the galaxy for the source of rock music. Confusingly, they first check out the planet of Acirema, where Zadora is hooking up with Jermaine Jackson in the post-apocalyptic pop video for their hit* song When the Rain Begins to Fall. This is quite confusing, since the presence of an exact Zadora clone on Earth minutes later is never addressed, even though the film ends with her and Sheffer lip-syncing to the same tune. It turns out, the video was not intended to be part of the opening, but was spliced in there after the song became a success.

Our alien musical tourists land in the small town of “Speelburgh”: oh, hold my aching sides, for I fear they may split. However, it’s a town that seems stuck in the fifties, with the teenage scene led by Frankie (Sheffer) and his rockabilly posse, the Pack. He won’t let his girlfriend, Dee Dee (Zadora) sing with them, but ABCD and his band are happy to indulge her. Cue the usual battle of the bands and old vs. new. Except, the film realizes that is not going to be enough to hold any audience’s interest, even a more forgiving one still amazed by the concept of pictures that move, and so splices on a variety of subplots to try and sustain things. 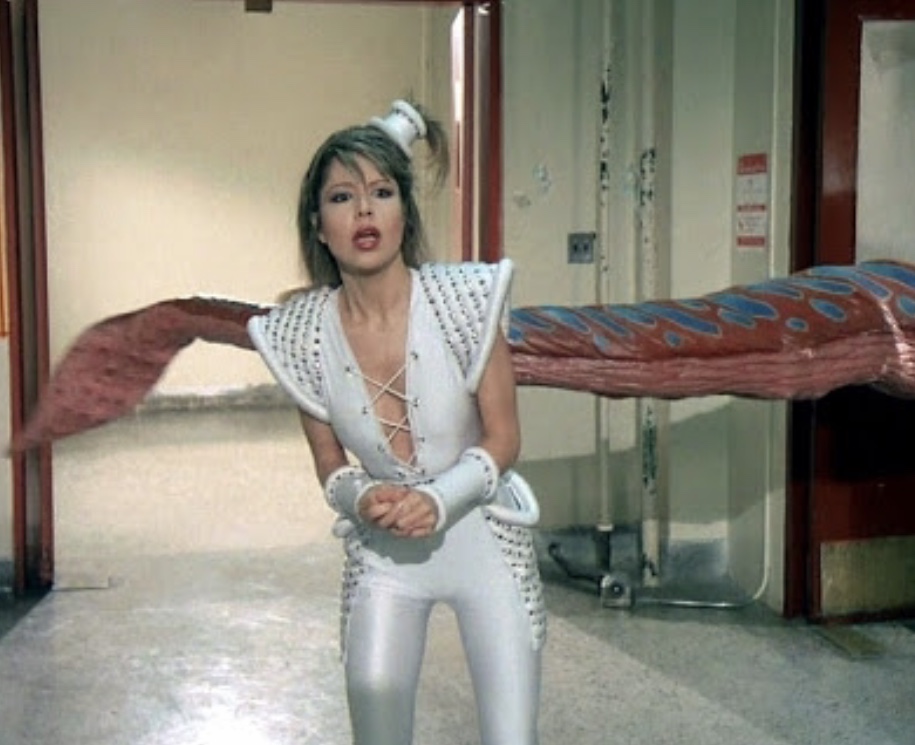 The first has the local polluted lake spawning a behemoth, whose tentacles languidly roam the town when the plot needs a cheap thrill. We never see anything but one limb, and much as I wanted it to imitate a garden-hose on Ms. Zadora, that hope was never realized. At the end, it instead wraps a tentacle around the school, until the tip is cut off, at which point literal soap-bubbles spray out the end. Okay… There are also a pair of lunatics who escape the local asylum, and in the final reel, the one played by horror icon Michael Berryman chases Dee Dee’s pal Diane (La Placa) around the school with a chainsaw. Until it breaks down, at which point she helps him repair it. This is actually the joke in the entire film which works best. Finally, we have the alien-obsessed sheriff, played by Ruth Gordon. She won an Oscar for Rosemary’s Baby, proof that fame in Hollywood can be fleeting.

Gordon was then not far off ninety years of age, though her playing a law-enforcement officer is not the worst bit of age-related casting here. That would go to Zadora, who manages to surpass Olivia Newton-John in Grease for the most dubious “teenage girl” in cinematic history. ONJ was 29 when Grease came out; Zadora was already in her thirties when shooting this, in the fall of 1983. Though being five foot nothing in her socks probably helped. She did also have some singing experience, unlike Shaffer, who didn’t provide a single note in the entire film, despite being cast as the leader of a band. Not that this stops him from getting one of the most jaw-droppingly terrible music videos of a decade in which there were multiple credible contenders.

I’m not sure what makes this so amazingly bad. It may be the way the song rhymes “male persona” and “status quota”. It may be the inter-cut shots of a literal cougar. It may be how the song’s soft-rock stylings are utterly at odds with the rockabilly character Sheffer is playing. It may even be the gratuitous backing dancers, who have clearly strayed onto the lot from an audition for a community theatre production of Cats. It’s most likely a combination of all the above. The end result is, however, I will be completely unable to watch Nightbreed again, without sniggering and making “Here kitty-kitty…” noises, any time Sheffer appears on screen.

The rest of the aliens were members of actual band Rhema. They had started out life as a “Christian, Latin, soft-rock” band, out of Phoenix, Arizona in the late seventies, and were plucked from complete obscurity to take part in the movie. Well, with the exception of their bass player, who was booted to make way for Nolan, after scoring a failing grade on their screen test. Seeing the rest of the band’s unperformances, I can only wonder what he was like. They were made over into Devo-wannabees for the purpose of the film, though their resulting record contract was stymied by the film basically getting buried. According to band member Marc Jackson, “I am hoping that the band and the film are mocked by as many people as possible.” Happy to oblige, Marc. 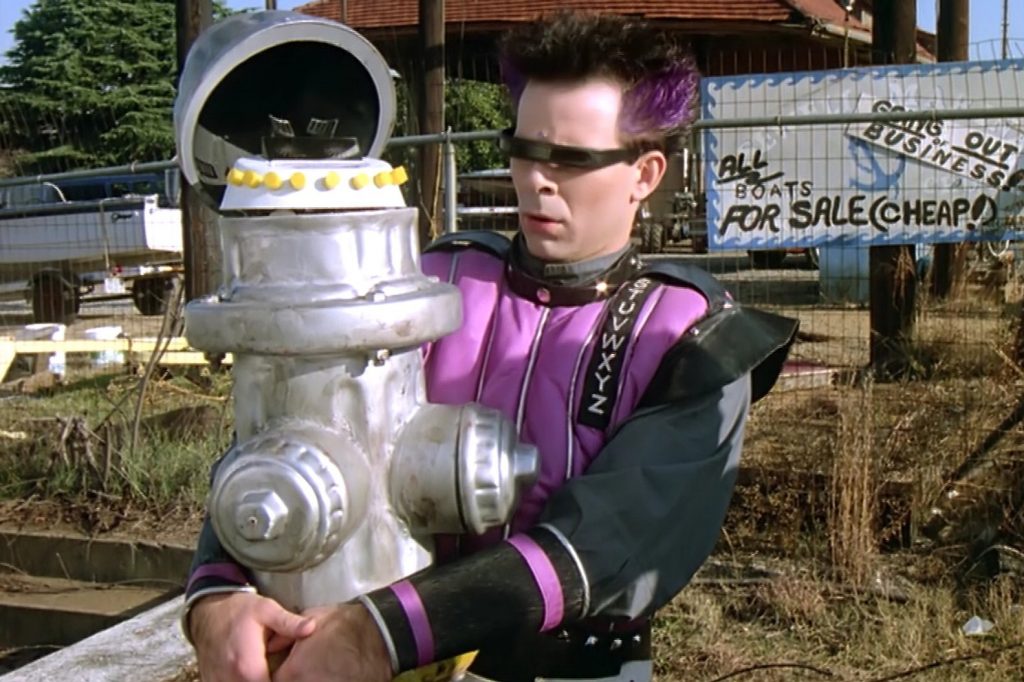 As mentioned above, even though the film was completed by the end of 1983, it was shelved, and not shown anywhere for four years. Another member of Rhema, Crag Jensen, says this was down to Mr. and Mrs. Zadora: “They decided it just wasn’t her and that it really didn’t fit the image she wanted to convey to the public on her way to stardom.” Think about that for a moment. The makers of Butterfly and The Lonely Lady concluded that Rock Aliens did not meet their exacting standards for release. Admittedly, having seen it, I can hardly argue with them. This marked the end of Zadora’s star vehicles, hubby apparently deciding to cut his losses.

One wonders what might have happened had writer James Guidotti’s vision been preserved. It was not originally intended as a musical at all. more a mash-up of genres to give the feeling of late-night channel hopping between movies about beach parties, alien invaders, etc. Again, that’s an idea which would prove to be quite workable later in the decade, for Amazon Women on the Moon. Instead, by the time it got spat out by the Hollywood meat-processing plant, it instead delivered a clear reminder that not everything about the eighties was quite as wonderful as my rose-tinted nostalgia would have me believe.