I will admit to being a bit doubtful about this going in. British rom-coms – actually, rom-coms from any location – are not my favourite genre, usually being soppy rubbish, with the emphasis on the “rom” and far from enough “com”. The horribly generic poster (below right) wasn’t exactly selling it to me either. But, hey, this has Tennant in it, and he’s usually worth a look. To my great surprise, this managed to hit the sweet spot between the genres – though it’s probably less romantic than familial drama. 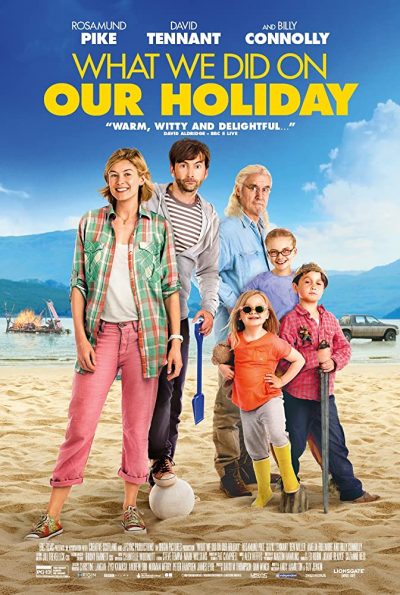 The McLeod family is splitting up, with husband Doug (Tennant) and wife Abi (Pike) getting a divorce. A custody battle for their three kids looms. But before that, they have to head from London up to the highlands of Scotland, where Doug’s father Gordie (Connolly) is about to have his 75th birthday, with Doug’s brother organizing a party. Gordie has also got terminal cancer, and Doug and Abi agree to keep their troubles secret, to avoid spoiling the occasion. Doing so may prove tough, especially with eldest daughter Lottie (Jones) a great believer in the truth. But it turns out Gordie is largely unfazed, having come to peace with life and death, and passes away on the beach while out with the kids. Having just heard his half-joking wish for a Viking funeral, and knowing that the grown-ups would only bicker, they decide to give Gordie what he wants (above). Hilarity, as they say, ensues. As does family bonding – albeit only eventually.

The amusement provided was quite surprising given the subject matter. But what could have been an exercise in sentimental schmaltz remains impeccably grounded, thanks largely to Connolly’s performance, bringing the dying man alive. Er, as it were. Gordie has clearly gone through all the stages of grief and reached acceptance: whenever my time comes, I hope I accept it with as much grace as he does. The other thing that works beautifully for the film is the dialogue, which is genuine and sharp, fitting all the characters. Even the moppets are endearing, potentially the most adorable trio of moppets since The Railway Children.

There are a couple of elements which, to be honest, stretch credulity to the point of implausibility. When I was the age of the children here, I wasn’t quite capable of constructing anything which would remotely function as a Viking long-boat – let alone in a couple of hours and entirely out of materials to hand on a Scottish beach. My boat-building efforts consisted of nailing a couple of bits of wood together. The result immediately capsized. I’ll let that slide, at least compared to the significantly bigger stretch. We are apparently expected to believe the family spent several days holidaying on the West coast of Scotland and it did not rain once. Yeah, this was clearly a shameless propaganda movie made in conjunction with the Scottish Tourist Board. And likely requiring heavy CGI to give the illusion of pleasant summer weather. You’re really not fooling anyone, y’know.