After What We Did On Our Holidays, we completed our Tennant double-bill with this, where he’s playing a considerably less sympathetic character, to put it mildly. He’s very much the villain of the piece, and is decently creepy as it. However, it’s the kind of film which would have been over in about 15 minutes, if anyone involved had behaved sensibly, and right to the end requires some pretty idiotic decisions from those concerned. 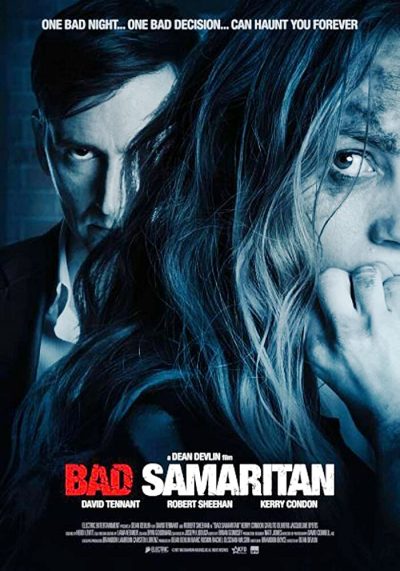 Pals Sean (Sheehan) and Derek (Olivero) are car valets at a Portland restaurant with a sweet scam going. When the patrons are inside, they pop back to the customers’ houses and use the keys for some light-fingered action. However, when Sean borrows the Maserati belonging to Cale Erendreich (Tennant), he gets a lot more than he bargained for. Because, chained up in a windowless room, he finds a woman, Katie (Condon) – and evidence she may not be Cale’s first victim.

Really, I am tempted just to drop the virtual mic and end the review there. It can only really go downhill from that pun, I feel.

But let’s soldier on. Sean is unable to free her before Cale requires his car back, and after arguing with Derek about what to do, notifies the police. They naturally, find nothing, for Cale has moved Katie from his townhouse to a remote cabin, to continue his “training”. Worse, Cale has identified his visitors, and begins the systematic destruction of their lives. Sean’s girlfriend is beaten up and his parents lose their jobs; then he comes after Sean himself.

The problem is, far and away, Brandon Boyce’s script, which requires everyone on both sides repeatedly to make poor choices. A couple of examples will sufice. Sean could easily have proved his case to the cops if he had simply taken a photo of Katie – he even has his phone out, taking a pic of a cheque when he finds her. And after offing one collateral victim, Cale picks up his victim’s phone and accepts a video call request, because… Well, because the plot needs him to. In reality, any smart killer would simply dispose of Sean and Derek at the first opportunity. But I guess that’s the difference between a truly intelligent serial psycho, and the conveniently egotistical kind, on which this kind of film relies for its existence.