This starts off as a war film, and as such, is considerably more functional than memorable. It’s D-Day, and a group of American soldiers are about to be parachuted in behind enemy lines, to blow up a church tower that’s a key part of the Nazi communications grid. They don’t even reach the drop zone before the plane is shot down, leaving less than a handful of men to try and carry on, led by Corporal Ford (Russell). They recruit a local villager, Chloe Laurent (Ollivier), and take shelter in her house to plan an attack. But there’s something weird about things: the church tower isn’t just a radio mast. It appears to sit on top of a secret Nazi science lab. One of the soldiers, Private Boyce (Adepo) ends up inside the base, and discovers they are carrying out human experiments. A captured SS officer, Captain Wafner (Asbæk) provides more information, and the team eventually decided that destroying the lab is as important as their original mission. 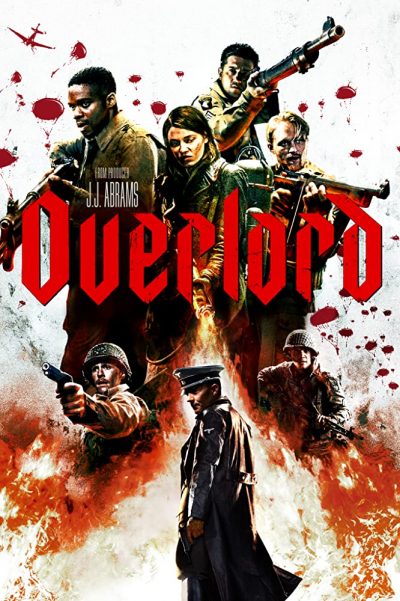 Which is where the fun starts. Because Wafter gets injected with the serum on which his Nazi boffin buddies have been working, giving him a massive swastika-shaped power-up. His strength, speed and, most of all, capacity to take damage, are all radically enhanced. And he’s not the sole beneficiary of this boost, as Boyce, Ford and the rest of the Allied troops are about to find out. As you can imagine, this is where it deviates most sharply from the usual template, established back in the sixties by films like The Guns of Navarone, Where Eagles Dare and The Heroes of Telemark. That’s also when it is at its best, to the point you wish they’d spent more time on this fight, with less creeping around the village, searching for their mates, or trying to make us care about the fate of Chloe and her little brother. There’s also the rather obvious historical problem of Boyce being black, at a time when the US Army was strictly segregated. I’m unsure whether such colour blindness is laudable or not.

It’s only when the zombies – for want of a better word – take the stage, that the movie bursts into glorious and gory life, like the cross between Castle Wolfenstein and Doom readers of a certain age probably contemplated. There have been a slew of “Nazi science” related films over the past few years, but these have generally been at the lower end of the budget spectrum. Money, it’s safe to say, does not appear to have been an issue here, and the results are excellent, and it does at least save the best for last. While rumblings about this being a part of the Cloverfield universe do not seem to have panned out, it is possible to see how it could fit in. For the first hour, however, you are probably better off watching Saving Private Ryan, or any of the other, better war films mentioned previously.