Of all the things with which mankind is not meant to meddle, I would put “wasps” at or near the top of the list. Even in their unaltered state, they are are a hideous combination of fury, bitterness and loathing, with the means to hurt, and lacking the grace to die after stinging you. I appreciate that scientist Kent Horvath (Shanks) is researching ways to kill them more efficiently. However, his experiment goes to prove that what does not kill wasps, only makes them stronger. As in, giving them increased aggression and hyper-toxic venom. Pretty much my worst nightmare in fact: I spent much of this telling myself, “It’s only a movie… It’s only a movie…”

Fortunately, it’s only a SyFy Original movie. Had this been executed by a more competent director (rather than the man who would go on to give us Beyond Loch Ness), from a good script, with effects not scraped from the bottom of the barrel (and not this decade’s barrel either), I’d probably be voluntarily checking myself into a mental care facility. Instead, I was able to handle it with only slightly clammy palms, and occasional restless shifting in my chair. The plot follows the tried (or tired) and tested formula. Scientist warn authorities of threat. Authorities poo-poo threat, and proceed with planned local festivities. Local festivities go badly pear-shaped. Scientist teams up, in this case with shapely and remarkably tall entomologist ally Cristina Bowen (former supermodel Alt; I guess Lucy Lawless was unavailable) and Q (Chevolleau), a plucky pest control operative with a flamethrower he’s keen to use. They fight the threat – here, with bicycle puncture kits and a fire extinguisher – and save the town, 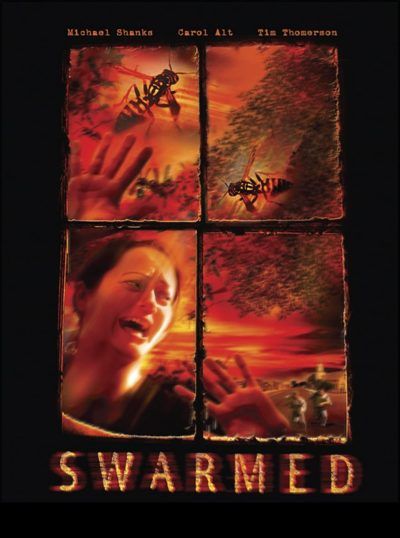 It’s all very boilerplate, and the execution is mostly lukewarm, with occasional excursions into competence. I did have to laugh at the sequence where the mayor’s PA goes hunting one of the wasps… with a full-scale shotgun. Surprisingly, it’s a technique that works, albeit only after a while, and considerable amounts of collateral damage. More of this kind of droll self-awareness would have been welcome. Instead, the B-movie being watched by Q’s assistant seems like it might have provided greater entertainment. People flailing at largely digital insects can only go so far, though I did enjoy the gratuitous wasp autopsy stock footage. Pulling apart is too good for them, I’d say.

Thomerson adds value as barbecue sauce mogul Phineas Washburn, sponsor of the town event in question (a burger cook-off, providing lots of raw meat to attract the critters), and paying off the local mayor in stock options. His fate, involving a long garden hose, was one of the “restless shifting” scenes mentioned above, since it had echoes of a minor personal terror. Otherwise, imagination seems to have stopped at the basic premise, and copious wasp POV (top). No spheksophobics – that is us “fear of wasps” folk – appear to have been consulted by the production. I feel sure we could all have provided a slew of interesting ways to get insects into contact with fleshy targets.