I must say, this splices together a pair of completely disparate genres, which I had not seen combined before: the zombie (more or less) movie, and the whodunnit. While it’d be a stretch to say this results in a seamless end-product, it probably works a bit better than you might expect. Events take place after an outbreak of uncertain origin, turning those infected into mindless killing machines, sensitive to sound. A small group of the uninfected have been thrown together and are holed up in a house together. However, the stress is inexorably building, as their supplies dwindle to the point where staying inside is no longer a sustainable option, with some already preferring the certain death waits outside.

Matters aren’t helped by the arrival of two newcomers, causing additional friction. It’s not long after when the other half kicks in, given the discovery one morning of a resident in the bath, with a slit throat and a missing tongue. It’s clearly not the infected who were responsible for this; rather, someone inside the house has a grudge, a knife and a souvenir collection. In what’s basically a real-life version of a murder mystery dinner-party, the others have to try and work out which one of their number was responsible. And they’re not necessarily great at amateur detecting. However, there’s a further twist, in that the viewer knows the identity of the killer already, being aware of… certain facts. So it’s a whodunnit, only from the inside. 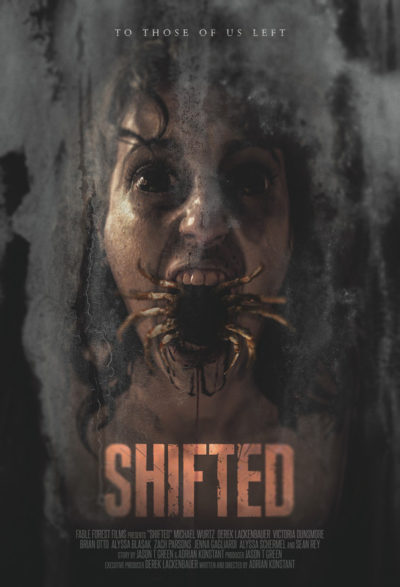 Making this appears to have been an extraordinarily lengthy process: per the makers, “There is one scene in the film that has portions shot three different times in three different years with the same actors.” I honestly couldn’t tell you which, though I was rather more engrossed in watching things unfold, to obsess over any technical or continuity flaws. I was also quite impressed with the concept behind the monsters, the victims being turned into meat puppets by what I guess are spider-like aliens (as seen on the poster). The execution is an area where the low budget is a bit obvious, and Konstant is probably wise to keep the glimpses of them short and under-lit (top). Do not expect The Thing-like levels of carnage.

However, within its limitations, this works nicely. It’s helped by a good ensemble cast, led by Wurtz as Winter, one of the new arrivals, who has figured out how to move among the infected. It is a little strange how quickly he goes from an outsider pointing at gun at people, to leading the murder investigation. Though it makes sense if you consider strength of personality across the characters, it’s likely a toss-up between him and Derek (Lackenbauer). No surprise, then, that the film eventually leads to a confrontation between those two. The ending is a little abrupt, the end-credits playing out over a conclusion that’s not exactly definitive. I can’t complain too much: what has happened to that point having been more than satisfactory.