I went into this without knowing particularly much about it, and that’s probably for the best. So this review is going to be short on plot details, and relatively long on discussion. If I therefore end up talking about the urban hell which is Detroit, you’ll know why. It begins with Tess (Campbell) pulling up, late at night, to her Airbnb in a particularly decrepit area of the city, which she is visiting for a job interview. The key is missing. Worse follows, as the place is already occupied by Keith (Skarsgård), due to a double-booking. With no alternatives, an uneasy peace is brokered, and they agree to share the place. Odd incidents follow, such as Tess’s bedroom door being opened. Things only go downhill – or, at least, downstairs – from there.

That’s all you’re going to get from me, so we now enter Vaguesylvania. This set-up is very well handled, with almost no slack. Initially, Tess behaves in a way that is smart and entirely plausible, largely in defiance of the typical horror character mentality. However, the scenario which unfolds is simply incompatible with common sense. There’s a point at which Tess hovers at the top of a set of stairs, before deciding to go down them, in order to rescue from death someone she has known for less than 24 hours. As Chris put it, “Whatever happens from now on, it’s her own fault,” and I can’t argue with her. Even though the film works quite hard to depict the neighbourhood as one outside the rule of law, it never manages to convince. Considerably more poor decisions follow. 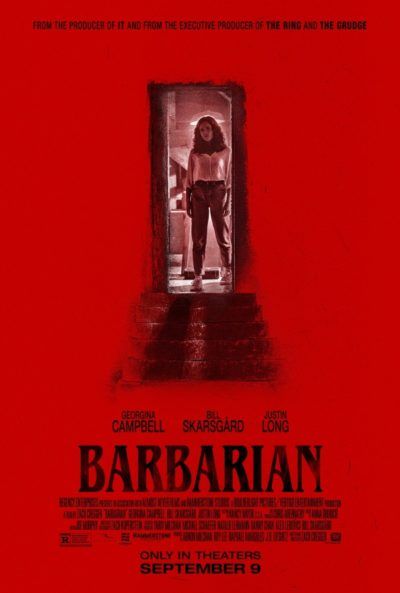 If there’s a film I was reminded of, it’s probably Parasite, in the way it builds a solid foundation, then unveils a revelation, and can’t quite stick the landing. This doesn’t make Barbarian worthless; indeed, with fewer expectations going in, there was likely less disappointment than for the Best Picture winner. The narrative is well-handled, tying together its disparate threads with competence. We get the back-story, from forty years previously, and also the story of the current owner, Hollywood executive AJ (Long), who is stuck in a sex scandal, and returns to Detroit seeking to liquidate his assets. While not every question is answered, I have fewer than I’d expect, considering the wild direction the story goes.

With this #MeToo angle and general social consciousness, I was amused the main antagonist is a woman, but is played by a man (Davis). That’s not very gender equitable, is it? What is it called, when a female role goes to a male? Dickwashing? Given this is nowhere near as smart as it wants you to think, best put all logical thought aside. Just appreciate a decently creepy monster mash, with some surprisingly gooey moments, and in which just about everybody, with one quite glaring exception, will pay the price for those questionable choices. Pro-tip: in a horror movie, boldly stating you have been safe for 15 years practically counts as signing your own death warrant.