Cody (Adams) has not exactly had the easiest of lives, having been brought up in the foster-care system. This was due to the various issues, including substance abuse, of his mother, Jewel (Allen), who still works as a hooker on the streets. Their relationship is strained, to put it mildly, and not helped by Cody taking up with one of Jewel’s colleagues, Michelle. A bigger problem than this family drama, however, is Cody having come into unauthorized possession of a new strain of drug. The man behind it, Nicholas (Labrava) is furious at the thought of his secret leaking out before he can maximize profits, and sends his top enforcer, Dean (Etebari), to track down the culprits. Except, it turns out Dean and Cody are… not unknown to each other, shall we say. 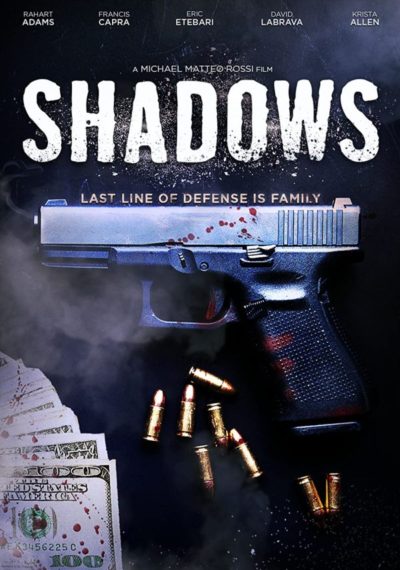 This is low-budget, yet rarely embarrasses itself, working within its limits well enough. Indeed, if anything it may be a bit too shiny and sharp for the material. It’s drugs and whores, people. The dark underbelly of society should not be as crisp and well-lit as here. If the material is familiar – True Romance by way of Crying Freeman perhaps – Matteo has assembled a generally decent cast of actors. You’ll recognize quite a few faces, even if their names might elude you. For example, we know Etebari from Witchblade, though that was twenty years ago now. He’s aging well. There’s probably a portrait in his attic, showing the ravages of time. Or Vernon Wells from Mad Max 2, in an amusing, if not particularly important, minor role.

Less successful are the general assholes who are Cody’s two pals. There’s annoying, and then there’s the cringe power duo of Tweedledum and Tweedledumber here. I think they’re supposed to be some kind of comic relief. They’re closer to bladder relief, in that every time they appear is a good time for a toilet break. I understand the need to alleviate the tone occasionally, in what is generally intended as a relatively downbeat experience. However, their presence feels like a terrible misfire. Fortunately, the main cast members are decent enough to counterbalance things. even if Michelle feels superfluous once the body of the action gets under way.

That is arguably a little later than I was hoping, though the drama to that point has been intense enough to hold your attention, and – with the exceptions noted above – the supporting characters keep things interesting. For instance, there’s a pair of killer sisters (Cathy Baron and Eve Mauro), whom my GirlsWithGuns.org self feels deserved a movie of their own. What I think is most important is that the makers of this knew their limitations, and don’t wreck themselves by pushing the film past what can be accomplished. If a little “safe” in terms of approach and content, I still found myself entertained. Provided you keep your expectations similarly restrained, and don’t expect the likes of Goodfellas, you should likewise be fine.

The film is available to stream now.