If an Italian take on the cowboy genre is called a spaghetti Western, what should we call an Australian movie which uses similar elements? A shrimp on the barbie Western? A Vegemite Western? We likely need to decide, for despite its contemporary setting, this could just as easily take place in the Wild West as the… um, ‘Orrible Outback. New cop Shane Cooper (Kwanten) arrives in the remote town of Red Hill, with his pregnant wife, Alice (van der Boom), hoping for some peace and quiet after a previous miscarriage. On his first day, he meets his boss Old Bill (Bisley), investigates the mysterious killing of a rancher’s horse, and prepares for a big storm to hit the town.

None of the above turn out to be particularly important, however, despite the film spending more or less time on setting them up. Instead, about the only thing that matters is the escape from prison of murderer Jimmy Conway (Lewis, star in The Chant of Jimmie Blacksmith), who was convicted of the brutal murder of his wife by Old Bill. The cop fears Conway will head back take revenge, and assembles a posse of residents to help the police defend the town. Bill’s concerns prove well-founded, and the highly-motivated escapee proves to be more than a match for the locals, killing them with almost supernatural ease. Yet he declines to do the same to Shane, who begins to wonder if there’s more to the situation than he has been told. 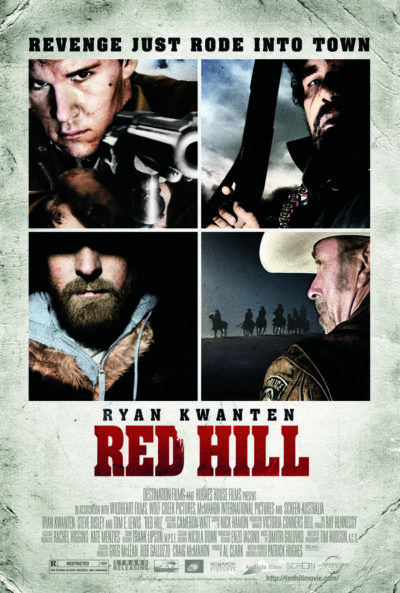 The various elements here are quite interesting, yet it never manages to mesh them into the classic it could have been, mashing genres – in particular the horror and Western. For as noted, Conway is straight out of the Michael Myers/Jason Vorhees playbook in many ways: an unstoppable, silent killer (he only has one line, right at the end), who returns to the scene of his crimes to wreak further carnage. Either he’s impervious to bullets (and cars!), or some of the locals are very bad shots. Conway is even disfigured, having been badly burned during his arrest. Yet he’s not going after horny teens or virginal babysitters, and his motivation brings it closer to the spaghetti Western. In particular, something like And God Said To Cain, though the focus here is on a neutral observer.

I did keep expecting the animal attacks to show relevance. They don’t, except for a rather ludicrous scene, which detracts rather than enhancing proceedings. This is at its best when keeping things simple, and building towards the inevitable confrontation between Conway and Old Bill. Shane has to decide where he stands: on the side of law, or of justice. You may well be slightly ahead of Shane in figuring out what is going on. Mind you, he literally is given a hand-written explanation. The character work is good enough though, that such concerns don’t stop this from being a worthwhile watch.