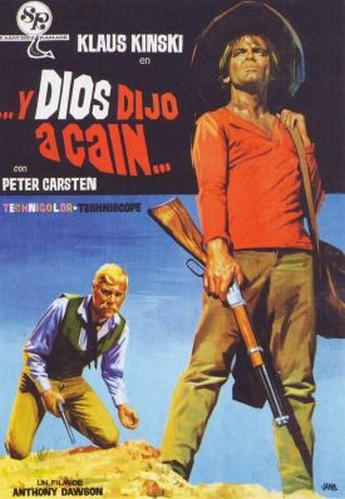 Not normally a fan of spaghetti Westerns, but this one really worked, in part because it seems to absorb the trappings of the horror genre. Instead of a serial killer breaking out of the mental hospital to return home and wreak revenge, we have Gary Hamilton (Kinski), released from prison ten years after being framed for a robbery, thanks to Acombar (Carsten) and Hamilton’s former girlfriend, Maria (Michelangeli), who switched sides and betrayed him. On his way back to town, Hamilton meets Acombar’s son Dick (Cantafora), who knows nothing of the past, telling him to let his dad know Hamilton is on his way. Needless to say, this sets panic off among Acombar and his men, with the town already shutting up shop because of an advancing storm. The eerie emptiness sets the stage for Hamilton’s arrival, and a night which will leave none of the participants unchanged.

It’s a simple premise, and what makes it work is the crisp execution by Margheriti. Hamilton becomes a ghostly killer, whose warfare is as much psychological as physical, e.g. ringing the town church bell to help increase the nervousness among Acombar’s men. Kinski is perfect for the role of a single-minded, stone-cold killer; he doesn’t have all that much to say, yet still projects the dedication which results from a decade of hard-labour, with nothing to think about except revenge. You even feel pity, to a certain extent, for Acombar and Maria, who suffer the blowback of a decision made then. However, it’s the atmosphere that stands out, with the rising wind providing most of the soundtrack, as Hamilton moves inexorably towards his goal, leaving corpses in his wake. If the literal storm is a bit obvious as a metaphor for Hamilton, and the story does become somewhat repetitive in the middle, it gets bonus credit for staging the “hall of mirrors” climax three years before Enter the Dragon. Spaghetti westerns are not normally a genre I typically watch: if this is anything like a typical example, that might have to change.