While recovering from double mastectomy surgery, veteran actress Veronica Ghent (Krige) and her minder/PA Desi (Eberhardt) head off for a solitary retreat, deep in the Highlands of Scotland. As soon as they arrive, problems start: the most obvious being it’s not solitary at all, but a group event run by the obnoxious artist Tirador (Everett), much to Kate’s horror. The place is also located on the site where hundreds of witches were burned at the stake during the Middle Ages, and the residual energy seems to affect both of the women, in different ways.

This matters, because Veronica has a long-buried trauma, deep in her past. On the set of her first movie, when she was just thirteen years old, “something” happened involving her and adult director, Eric Hathborne (McDowell). Quite what that was, we don’t know, since the film chooses – as with just about everything else – to remain maddeningly vague. There’s an air of Polanski/Kinski though. He never took responsibility or even acknowledged doing anything wrong, though with the film being remade in the #MeToo era, pointed questions are now being asked. Meanwhile, Desi befriends a local guy who works at the retreat, goes to a viable contender for the world’s crappiest disco, takes psychoactive drugs and narrowly escapes being raped, because the forest mud – infused with the remains of dead witches – decides to come to her rescue. 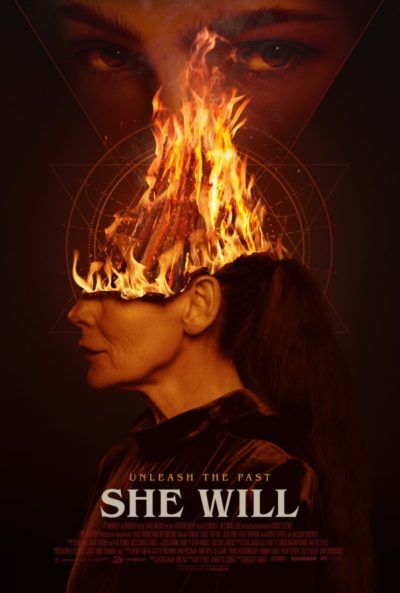 If this sounds like the kind of thing which would come out of a Gender Studies 1.0.1. workshop, then I am succeeding in my job as a critic. The movie seems almost deliberately crafted as an explainer for why I hate “elevated horror”, with its insistence on sacrificing coherent narrative (why has nobody else apparently been affected in the 300 years since the last witch was burned?), on the altar of well-photographed, moody atmosphere. I will double down on my dislike, if the makers choose to use horror as a blunt stick with which to belabour the audience on some topic of social concern, especially when done with all the subtlety of a Hannah Gadsby stand-up performance. Generally decent performances and an occasionally impressive use of digital effects, can’t counter the shrill squeaking inherent in both the concept and execution.

Krige is definitely the best thing about this, playing a woman who is clearly beyond the point at which fucks are given about what anybody else might think. If this had gone full-bore into Veronica embracing her inner sorceress, it would perhaps have been onto something; hey, it seemed to work for Bette Midler in Hocus Pocus 2. Instead, all we get is her setting fire to the arm of a man, who had the temerity to snort derisively at a comment about the patriarchy, plus the inevitable confrontation with her abuser. Admittedly, the latter is handled quite nicely, with one particularly effective moment of transformation, after she apports in to face Hathborne. This and a good soundtrack by former PWEI member Clint Mansell, are the only things I’m likely to remember about this movie, without rolling my eyes.