“Why do we keep remaking old trends? Are we adding something new?” muses a fashion guru at the beginning of this. They are likely posing the same question the viewer is asking, for this is a remake of the David Cronenberg body-horror flick from 1977. It has been several decades since I saw the original, so I’m not really able to compare and contrast it to this version, and decide whether sufficient has indeed been added. I can say that, purely on its own terms, this is inoffensive and largely forgettable. The basic idea is the same as I remember from its predecessor: Rose (Vandervoort) is injured in a road accident and goes to a clinic for reconstructive surgery, run by Dr. William Burroughs (Atherton). The treatment has unfortunate side-effects. Specifically, turning Rose into Patient Zero, at the centre of a spreading epidemic of violent behaviour, and the only nourishment which can sustain her is human blood. 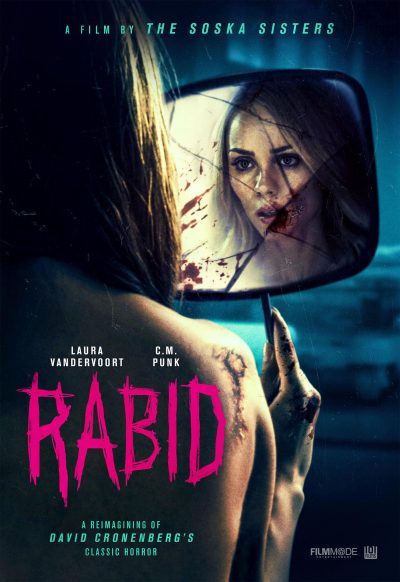 The dropping of Rose into the fashion industry appears to be aiming for social commentary about the emphasis on beauty in modern society.  I say “appears to be,” because whatever message is being delivered, was clearly far too subtle for me to notice. Mind you, I’d rather have a film err on that end of the social commentary spectrum. There are also a number of more or less awkward cameos and homages to Cronenberg. The doctor who first treats Rose is named Dr. Keloid, the same as the surgeon in the original (played here by Stephen McHattie, whose appearance is so brief, he must have popped in on his lunch-hour). The operation sees Dr. Burroughs clad all in red, like the Jeremy Irons twins in Dead Ringers, and even his name is likely a nod to Naked Lunch. Lynn Lowry, who was in Shivers, turns up in photographic form as Dr. Burroughs’s wife. Though at least those cameos make more sense than the bemusing presence of former pro wrestler C.M. Punk and his wife; despite his prominent billing on the poster (right), he’s in it for three minutes.

There are definitely echoes of Raw, which also had a vegetarian accidentally turned into a raging cannibal, transforming not only her diet but also her personality. So even bypassing the whole remake thing, this is a bit over-familiar. On the plus side, Vandervoort hits the necessary marks to be both a sympathetic and scary heroine, and the flesh-nibbling effects are solidly practical. It just doesn’t gel; I had to keep reminding myself the outbreak was due to Rose, as the film seems largely to forget this. That’s especially true when we reach the ending, where things suddenly take a left-turn into… Let’s just say, different territory. While arguably still occupying, at least loosely, the same “body horror” theme as early Cronenberg, the larger-scale finale feels as if it had strayed in from another movie. Maybe one based on a short story by Clive Barker? Regardless, this is unlikely to be remembered in four years, never mind forty.