An interesting but philosophically problematic tale, it’s the story of Cassandra (Mulligan), who dropped out of med school after an incident involving a close friend. Now, she has just turned thirty, still lives at home and by day, works as a sullen barista. By night, however, she goes to clubs and pretends to be drunk. [Hey, everybody needs a hobby] When men try to take advantage – and they always do – she plays along for a bit, then ends her illusion, gives them a stern talking-to about their actions, and tells them to sit in the corner. Ok, the last part is an exaggeration, albeit only slightly. However, when she finds a key player in the college incident has returned to town and is about to get married, she decides it’s time to step up her campaign and make the perpetrators see the error of their ways.

So, this is in the rape-revenge genre, albeit different in both parts of the equation. Firstly, it’s not Cassandra who’s the victim herself, making her more of a vigilante. Secondly, her revenge is, as noted, fairly weak. On at least two occasions, she fools her targets into thinking something much worse has happened, without actually following through on it. She’s clearly a vigilante who prefers to retain the moral high ground. In others, it’s really not much more than “Why don’t you think about what you did?” Even when it becomes more, it comes at a greater personal cost to herself, leaving the audience wondering if it was worth it.

Otherwise, apparently, all we men need is to be shown the error of our ways to attain wokeness, which is almost endearingly naive. At one point, Cassandra tells a victim there is someone else acting like her, only wielding a pair of scissors. Now, that’s a film I’d see, and an act which would have a genuinely chilling effect on perpetrators. Similarly, the men who attack Thana in Ms. 45 won’t be offending again. But I guess the concept of the gun as equalizer doesn’t fit the liberal arts worldview being espoused. 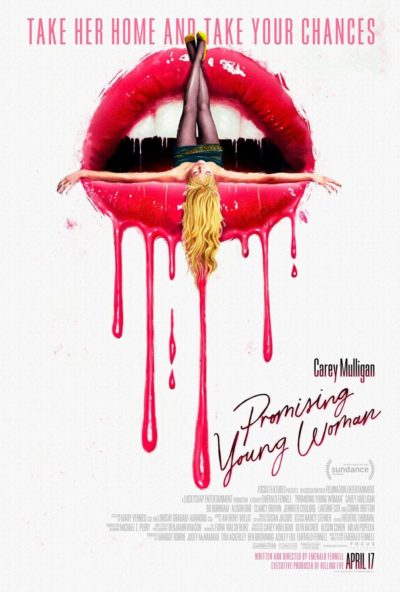 Like much here, it feels like lightweight feminist wish-fulfillment. The men are, without exception, two types. Some are proto-violators or enablers, one drunken giggle from being triggered into entering Rape Mode. Though it’s only ever Rape Mode, which a few harsh words from Cassandra can defuse, turning them into pussies, gibbering ineffectually about being nice guys. The others are milquetoast NewMenTM, all caring, supportive, and perfectly willing to embarrass themselves with a musical routine to a Paris Hilton song in a pharmacy. [Chris’s barbed comment in the middle of this: “Does he know he’s gay?”] A couple manage to be both, one in a twist only Stevie Wonder might not see coming. But there’s no middle ground I could recognize.

This universe eschews personal responsibility for the consequences of your actions. Make no mistake: no-one should be raped, ever. But a lot of bad things can happen if you drink too much, from a hangover through to killing yourself or others. If you drive off a precipice on the way home, no-one says “Teach cliffs not to be cliffy.” It’s more likely to be, “At least they didn’t hurt anyone else.” There’s only one scenario where some people – such as writer/director Fennell – feel a drunk person’s behaviour cannot apparently be considered a contributory factor. I don’t agree, out of moral consistency. I was mugged while drunk, and entirely accept my part in becoming an almost irresistibly easy target of opportunity. Shit happened.

That aside, there were still elements I liked, and despite a hefty 113-minute running time, it didn’t feel long (except the musical routine). Mulligan is very good, taking a character that’s all spiky edges, and making her sympathetic, even if still a child of massive privilege. Brown, as her father, was an interesting choice, considering he’s best known for phenomenally macho characters in Highlander and Starship Troopers. I very much admired the final reel, where the film goes a direction I genuinely did not expect, even if it’s borrows more than slightly – I suspect, entirely deliberately – from Dangerous Liaisons. Some scenes are blisteringly good, such as where Cassandra faces her old college dean, who has no memory of the specific incident, largely because they’re so common. Drunk kids have a lot of regrettable sex at college, I guess. I certainly didn’t.

So this was the kind of film where I could admire the impressive level of technical expertise involved, yet seemed to be populated entirely by people from a different species. As a result, I didn’t feel many of the emotions which it was clearly intended to provoke in the viewer. But then, I prefer my rapists to get considerably more than a warning as to their future behaviour.

Postscript. One particularly concerning thing about coverage of the film. After a complaint from the star, Variety posted an editor’s note at the top of their review which says, “Variety sincerely apologizes to Carey Mulligan and regrets the insensitive language and insinuation in our review of Promising Young Woman that minimized her daring performance.” I don’t think I’ve ever seen a publication forced into a cringing apology for a movie review. All the writer said was, Mulligan “seems a bit of an odd choice” for the role – fair comment given her track record of period pieces. It’s further indication we live in times where deviation from the hive-mind viewpoint is increasingly not tolerated. Especially by the supposedly tolerant…