Despite efforts to gussy itself up as being more, this is just another low-budget zombie flick. As such, it’s rather disappointing. There’s clear effort put into this, especially in the set-up. So when it ends up being four people running around poorly-lit corridors, pursued by ambling threats with bad complexions… Yeah, the sense of letdown is palpable. It begins with a semi-animated prologue telling the story of the tyrant King Dormant. After swiping land belonging to a wizard, the monarch and his descendants are cursed to protect the estate forever. In the face of any threats to it, Dormant’s deceased descendants will rise in defense. Which, as zombie back-stories go, is considerably more detailed than a crashed satellite. 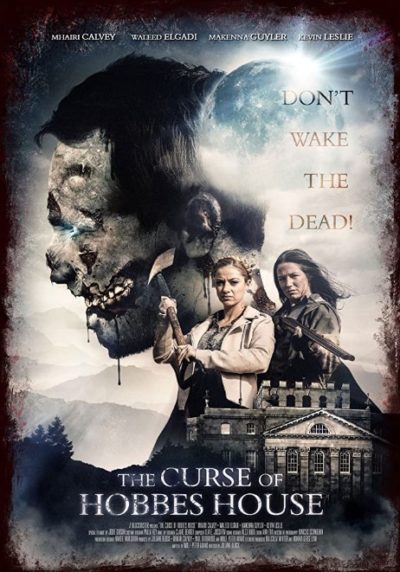 In modern times now, returning to their ancestral home for the reading of a will, after the death of their aunt, are estranged half-sisters Jane (Calvey) and Jennifer (Guyler). The former is homeless and unemployed, while the latter is a successful “influencer”. From the start, they’re at each other’s throats, and have to be pried apart by the other two present, estate grounds keeper Naser Mohammedin (Elgadi) and Jen’s boyfriend, Nick Thatcher (Leslie). After the aunt’s solicitor is impaled on a set of antlers (!), the four try to leave, only to find themselves unable to do so. On returning to the manor house, things go from bad to worse, as the guardians rise and lay siege to the house.

As mentioned, there are some nice little touches here. For instance, the guardians have glowing, blue eyes and kill by draining energy rather than more traditional methods, involving the gnawing of entrails. The escape method eventually used is… well, let’s say, not one I’ve seen in any other zombie flick. However, the key issue is the word “little”, with some ideas in desperate need of greater development. For instance, Jennifer being an influencer, seems inserted solely to make the audience dislike her. And all Jane’s issues, while creating initial sympathy, never serve any other purpose. On the other hand, it’s thoroughly predictable how the sisters will end up putting aside their differences. Nor is it hard at all to work out the identity of the person responsible for the rise of the guardians.

With only five speaking parts, and a clearly limited there’s never going to be scope for a lot of carnage on the human side. It takes about 40 minutes for the guardians to show up, though as that’s where the film’s originality runs out, this is not such a bad thing. However, two minutes after they appear, someone says, “I don’t think they can unlock doors.” Quite how they can be certain of this is unclear, yet it would seem to suggest a credible defensive strategy, that’s never applied. It shows again that this is a movie which needs to put more thought into some areas of its plotting, as well as one which perhaps would benefit from less attention to detail in others.