Andy (Wight) and Ronnie (Ironside) are two removal men, out on what’s supposed to be a normal job. Due to an unfortunate and escalating series of events, they end up with an ever-increasing pile of dead bodies in the back of their van. And all their efforts to deal with the problem, whether it’s dropping the corpses off a bridge, or attempting to contact the local mafia, only seem to make the situation go from bad to worse.

This is notable in a couple of ways. It’s the first feature film ever made in Doric, the dialect used in the North-east of Scotland. And it is incredibly foul-mouthed. Seriously. There exists a “sweary edit” which is simply the cursing (and is surprisingly coherent!). According to it, the film includes 440 uses of fuck/fucking, 24 of cunt, 24 of shit/shite and 33 sundry other bad words. The f-bombs would put it in the top five all time, though as it never received commercial distribution, this likely doesn’t qualify. It’s a shame, and is perhaps more due to the first point of note. For it might well qualify as foreign language by Oscar rules and require subtitles to be understood by anyone unfamiliar with Doric. However, Chris was able to grasp it, and she was born in New York, rather than Newmachar. She’s clearly been hanging out with me for too long. 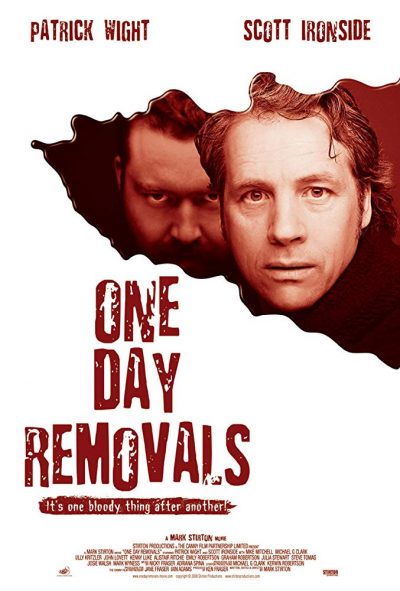 That said, the swearing feels entirely authentic, and once you get settled in, has an almost poetic, rhythmic quality. For an example, check out this scene, which sees our two heroes bickering over their ongoing problems and trying to figure out if any of their accidental victims can be salvaged. For bonus points, enable the YouTube auto-generated captions, and witness their abject failure. For example, a phrase which should be captioned as “Folk tend to notice when four fucking folk all go missing the same day”, somehow ends up subtitled as, “Folks pay the newest windfall fucking bukkake miss Anna seemed ad”. Hey, at least they got a couple of words more or less right…

The dialogue is certainly the film’s strongest suit. But it’s helped by two central performances perfectly suited to the lines, whether the frequent lament of “We should have worn gloves,” or Andy waxing lyrical in a theological vein: “God? Fuckin’ God? What exactly has God done for us today, Ronnie? If there’s one cunt that hasn’t done fuck all for us today, it’s God.” These are characters for whom it’s very easy to root, just ordinary blokes who are way out of their depth, and you want to see them find a way out of their predicament.

Less successful are the beginning and end.  There’s some ropey audio early on which is distracting – especially given the importance of speech to the film overall – and the end of the film goes on too long. We always know they end up arrested, because things are told in flashback by Andy to a disbelieving police officer (Mitchell). Nothing after that happens adds significantly to the story. But overall, it was mostly successful, even if it’s never exactly going to have a broad audience, by its very nature. A film further from its predecessor, The Planet, is hard to imagine, and that difference helps make this impressive. The whole thing was made available by the director on Youtube, so prepare for a genuinely unique experience.