After an opening narration by Scottish legend Brian Cox, reciting a poem about “Highland death” we see a man (Campbell) try to commit suicide, in a tent somewhere in the Scottish countryside. He survives, but apparently the experience unhinges him, turning the man into a gamekeeper-like. masked serial killer. Ten years later, a Japanese artist (Kajioka) visits the area, on a painting tour. He becomes the next target for the killer, harassed relentlessly across the remote mountainous landscape.

Stirton’s third film is another sharp change in direction. This is less effects-heavy than his feature debut, The Planet: this time, he only needs to make the Highlands look like the Highlands, not another world. Though I suspect special effects were still likely required, to create the impression it was sunny – frankly, the most implausible thing here. Either that, or they filmed all through the Scottish summer: both days of it. Hohoho. But what’s most striking here, is the dialogue. This is often an issue with low-budget films, both technically and from an artistic perspective. It’s dealt with here… by getting rid of it almost entirely, in sharp contrast to its very chatty predecessor, One Day Removals.  A somewhat brave move too, because a film-maker must then rely on other ways to tell the story. For the most part, Stirton does so effectively, although I’m not certain the story is there, however. 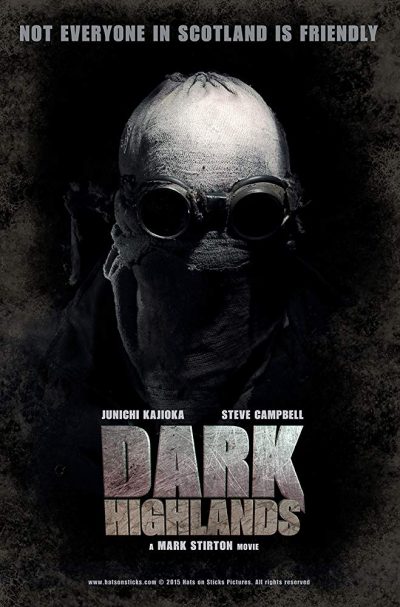 For this is definitely not a film to watch if you like explanations. There’s a lot here which is left, I suspect deliberately, entirely obscure. Not least the motives for the killer’s actions: he could off his victim at any point, and has no hesitation in doing so to anyone else who gets in his way. Yet, instead, he repeatedly uses tranquilizer darts, and on one especially bemusing occasion, even pitches the artist’s tent for him, so he has shelter when he wakes up. Perhaps it’s going for a Hitcher-like sense of “I want you to stop me”. But instead, it comes off more as under-written, not least because he’s never any more than a cypher, and certainly not Rutger Hauer. [Than again: who is?]

However, according to the film’s Facebook page, the gamekeeper hunts because, and I quote, “He’s a fuckin’ mental cannibal!” Yes, he’s a fuckin’ mental cannibal…who has acquired and learned to use a drone with a high degree of proficiency? Still, there appears to be a certain auteur-esque quality to this approach. In Stirton’s book Movie Boy, he talks about faffing around with a bunch of friends and a camcorder in the late eighties, and says, “If my style of direction is influenced by anything, it’s the egregious incomprehensibility of those early films.” In the light of this, Dark Highlands makes a lot more sense. Or, at least: its lack of sense, makes sense, even if I was still confused by its use of the word “iteration” to describe each of the three sections.

How much this all bothers you will likely impact your enjoyment of the film. It annoyed Chris considerably more, so she reached the end and… had questions. So. Many. Questions. Me, I’m rather more relaxed: I’m less bothered about the final destination, providing the journey to get to it is an interesting one. That’s the case here, and there were a number of elements which had me thinking “Oh, cool,” such as the perpetual buzzing of insects which accompanied the gamekeeper. Lord of the Flies, perhaps? Or just a nod to the horrors of the blood-sucking Highland midgie? At the very least, you’ll get to enjoy some well-photographed and spectacular scenery.