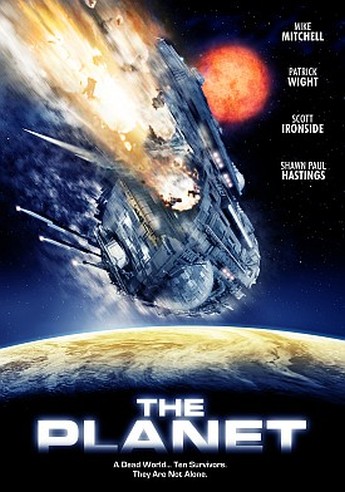 In many ways, this is totally brilliant, and I’m not just saying that because it was filmed in the NE of Scotland, near where I grew up. The budget here was £8,000. I’ll repeat that, just so you know there weren’t two or three zeros missing. Eight. Thousand. Pounds. That’d be a stretch if all you had was two people talking at each other for the entire duration. For a movie that starts in outer space, and includes a battle there (albeit a remarkably noisy one: film-makers should remember that, due to the vacuum, in space, no-one can hear you explode), before the survivors plummet to an alien planet, inhabited by translucent aliens and the remnants of a lost civilization. Way to bite off more than you and the spare change from down the back of the sofa can chew. And yet: wow. Simply, wow. Okay, the effects’ CGI origins are occasionally painfully obvious – but on the whole and, in particular, considering the budget, it’s a remarkable achievement. Mind you, the biggest trick pulled off is making a beach near Aberdeen seem like an sun-tormented alien planet: having spent four years at university there, I know frostbite is more of a threat in that corner of the world.

No, the problems are almost entirely with a script which seems half-complete; there are any number of threads which never go anywhere, such as the prisoner they’re transporting. At first, I though he was going to be some kind of Vin McDiesel, but he just wanders the desert, stabs himself in the hand and then almost vanishes from the plot. Why do ancient projectile weapons hurt the resident aliens, when the modern plasma guns are useless? What about this doomsday cult, of whom one survivor is a member? And, most burning of all, where does the F-sized marquee they erect after landing come from, since the escape pods in which they landed were little more than coffin-sized? If anyone can explain what happened at the end, I’d like to hear from you, since it made no sense to me. There’s a huge, glowing demonic entity, a spaceship that appear out of nowhere and some kind of sword artifact. About the only thing that could have made less sense was if the entire planet blew up. 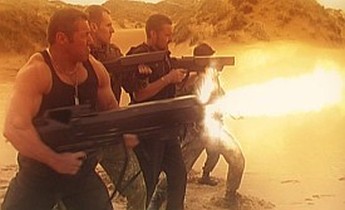 Most of the performances here are quite good. Mitchell is a former body-builder, and it shows: he’s got a good presence, and a Jason Statham-like career in decent B-action seems possible, even if he is almost fifty now. The rest of the cast provide decent support, though those unfamiliar with the local accents may initially experience some difficulty with chunks of the dialogue. The characters are nicely-delineated, even if given the brief running time [only about 70 minutes], you don’t get to know a great deal about them. Overall, this is clearly a huge labor of love for all involved, and the amount of effort that went into the production can only be admired and applauded. If only, if only so much work had been devoted to the script.

Update: director Mark Stirton writes, “If you listen very, very carefully indeed you can hear Vince the engineer talk about a ‘supply pod’. That’s where the great big tent came from. Also the cigarettes. Or… it was a nano built future tent (retro design) that McNeal had in his pocket. We just didn’t have the scene where they added the water to expand it. Or… a piece of the main ship made it onto the surface and, luckily it was the survival section.” Hey, sounds good to me. 🙂