At the end of the film, a crappy cover version by a female singer of a Rage Against the Machine song plays. A more appropriate metaphor for the movie would be hard to find. Well, maybe not. Turns out, the band responsible became notorious a few weeks back, when the lead singer pissed on a fan during a live performance of the same song. That may be an even more appropriate parallel.

22 years since the Wachowski Sisters revolutionized cinema. Their career arc since has been almost relentlessly down, though I speak as someone who liked Matrix Revolutions much more than most. But their stuff after the trilogy? Eek. Speed Racer is the biggest-budget film I’ve turned off in the middle, and nothing else I’ve seen convinced me The Matrix wasn’t a fluke. But maybe going back to their roots would reignite the amazing creative spark demonstrated by the original? For about 30 minutes here, it seemed it might work. It was almost a reboot, with Thomas Anderson (Reeves) now the world’s top game designer, who had created The Matrix. Or had it created him? Once more, he must choose between blue and red pills, and up to that point, the sense of queasy uncertainty about reality is beautifully balanced, along with some jabs at interpretations of the first movie. 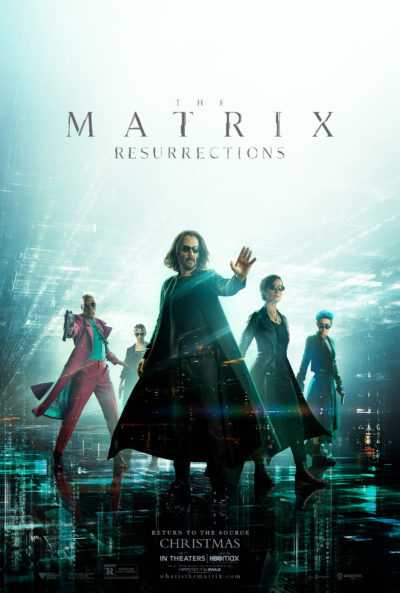 But he should have taken the blue pill, because everything thereafter goes increasingly wrong. Most painfully, the action is shitty, generic and very obviously not choreographed by Yuen Woo-Ping. Poor personnel choices include recasting Agent Smith and Morpheus (Abdul-Mateen II – presumably to avoid confusion with all the other Yahya Abdul-Mateens out there), even though the latter in particular is entirely irrelevant. Just because you say “I am Morpheus” doesn’t mean you are Morpheus, any more than saying “I am a woman,” makes you a woman… Turning the Merovingian into Hipster Hobo. Bringing Niobe back with Jada Pinkett-Smith in flaky aging make-up. Reducing Neo’s abilities to little more than an occasional force push. At points, it feels as if the makers went “What would be the worst possible decision?”, and went with it.

About the only thread that works is the love story between Neo and Trinity. As the latter – thank god they didn’t recast her – Carrie-Anne Moss steals the show, and if Wachowski had kept the film simpler, focusing on that couple, it might have worked. Instead, there’s so much extraneous stuff, it feels over-stuffed, even at 148 mins – though about a quarter-hour is end-credits. Apparently, Wachowski eventually agreed to make the movie, as a way of coming to terms with death, including that of her parents. I venture to suggest a therapist would have been cheaper, and left us out of it. Instead, an early conversation about making a Matrix 4 video-game – “I’m sure you can understand why our beloved parent company, Warner Bros., has decided to make a sequel to the trilogy” – proves uncomfortably relevant to this, and less meta than the makers probably wanted.

Now, if you’ll excuse me, I’m off to watch The Animatrix.