This movie sucks. Or maybe it blows. I keep switching between the two.

Okay, that’s enough vacuum cleaner references for now. But the worst thing here was probably that it contained absolutely no vacuum killing for about the first two-thirds of the movie. I mean, given the following synopsis: “A madman grafts a vacuum cleaner to his arm and decides to clean up society”, I was expecting a considerably higher amount of household appliance carnage. Instead, the tone is set with an opening skit, several minutes long, about a TV game show, whose title translates as Killing is Winning, where participants compete in Russian Roulette. I kept waiting for this to tie into the rest of the film in some meaningful way, such as the central character going after the show’s host. I can save you the bother. It doesn’t. At all. 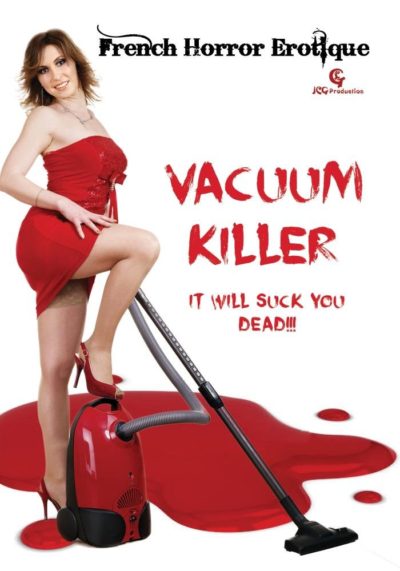 Indeed, the lack of a coherent story is perhaps the biggest disappointment. Well, second biggest: the failure to deliver anything like the poster (right) likely ranks #1. For it’s not French, barely horror, and certainly not erotique. It is the story of Chris Burst (Lamot, looking like a weedy version of Sting), whose mother commits suicide using a vacuum cleaner and a bath, only for her son to damage his arm badly in an explosion, trying to bring her back to life. For reasons never satisfactorily explained, he opts to replace it with said appliance, and engages in semi-random acts of carnage, such as against the music producer he blames for his mother taking her own life.

This never amounts to much narrative. In construction, it feels a little like Tetsuo the Iron Man, if the iron in question had been an actual iron. The hard, electronic soundtrack by Celsius also nods to that, and is perhaps the film’s best technical element. Quite what happened is also unclear, e.g. why is the vacuum’s tube running into the middle of Chris’s back? Why does he bother with a knife attachment rather than… just stabbing someone? If there had been some innovation, such as in the attachments used, that could have been fun. The only such moment is shown, top, where he converts the producer’s butt-cheeks into an organic record-player.

Again though, the how and why are never addressed. Instead, we get grindingly dull sequences, such as an irritated postal worker (Palucci), who tears up letters rather than delivering them. In many ways, Annoyed Postman would have been just as accurate a title, if nowhere near as catchy. Chris’s girlfriend also breaks up with him, though like so much else, this scene serves no apparent purpose. Even once the killing finally begins, there’s no sense of escalation or purpose. The film ends by having apparently grown bored with itself. It lets Chris just wander off, slowly, into the distance, before the credits roll even more sluggishly, after what seems considerably more than 69 minutes. I have to conclude: Vacuum Killer both sucks and blows.