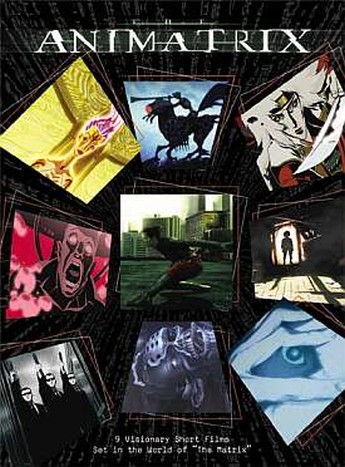 To summarise: they should have released this at the cinema, and sent Reloaded straight to video. The animated visuals are easily the equal of the live-action film, and the short running time of the nine episodes (averaging about 10 minutes) means there’s no time for the pointless self-indulgence – Zion rave, anyone? – or philosophical drivel which plagued Reloaded.

Almost every potential aspect is explored: the history of the man-machine war preceding the first film, the discovery of the attack on Zion, and various side stories, some involving Neo and Trinity, while others are entirely separate. The styles on view are varied too, from CGI to old-school cel animation – the best, however, combine these styles, as in Beyond, a story about a haunted house that’s really a glitch in the Matrix, and Matriculated, which has humans seeking to dupe a machine into believing in an alternate reality. The latter does lose its way in terms of plotting, but is just such fabulous eye-candy, you can’t condemn it.

Our personal favourite was The Second Renaissance, a ‘lesson’ showing how we became slaves to the machines. Mixing imagery borrowed from the Holocaust, Vietnam and other examples from history, it is worryingly plausible. Initially the victims, the robots created by humanity eventually turned in self-defence – when we blotted out the sun, their source of energy, they found another…us. This two-part entry runs about 20 minutes, but is extremely effective. Come Oscar time, however, you could stack up whichever five of these you want as nominees, and they’d all likely kick the arse of any other animated shorts released this year.