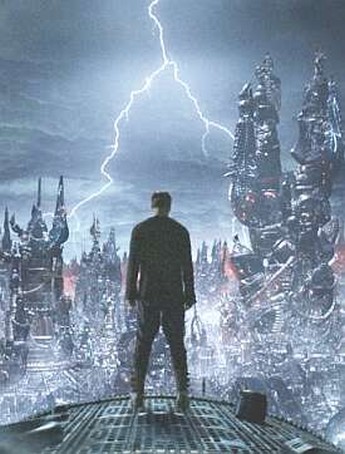 A poster-child for managing expectations, I went into this expecting it to suck. I’m pleased to say it doesn’t. The philo-babble that plagued Reloaded is largely bypassed, though the Oracle still speaks with the clarity of a fortune cookie – just at rather greater length. Morpheus (Lawrence Fishburne) hardly appears at all, and even Trinity and Neo are absent in the middle hour; they’re on a last-ditch mission to the machines’ city, while the final human stronghold comes under relentless attack. While large chunks feel like a totally mindless video-game (at one particular point, Galaxian!), the Wachowskis add to the humanity by focusing occasionally on minor characters such as an ammo-loader and a bazooka crew.

It leads, with the inevitability of continental drift, to a final battle between Neo and Agent Smith (Weaving, stealing the show again – though credit to another actor for a near-flawless imitation of his mannerisms). There’s one shot which, while of no real significance, causes the same sense of awe and wonder as the first occasion you saw bullet-time, and any number of minor spectacles, not least a moment of daylight that makes you realise how absent it has been. Most ends are tied up, despite a regrettable (and equally inevitable) leaving of doors ajar for further sequels. Overall, if you replace Reloaded with The Animatrix, this can take its place among classic SF trilogies.