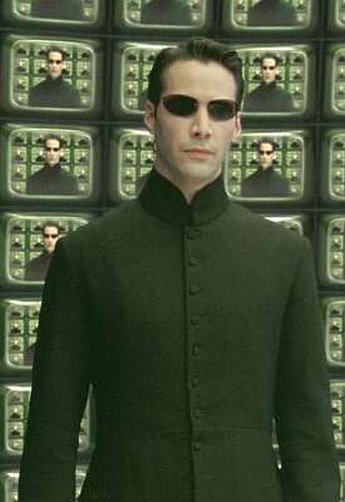 I really wanted to really like this, which may explain the palpable sense of disappointment I currently feel. Not that this is “bad” in most senses, just far short of what I hoped. In this installment, Zion, base for the last surviving free humans, is about to be attacked. Our heroes go back in the Matrix to seek advice from the Oracle, but encounter enemies old (Weaving as Agent Smith(s) comes close to stealing the movie) and new. And, naturally, fight. A lot. Like The Two Towers, Reloaded suffers from middle-movie syndrome. It lacks a start or end, and at 138 mins, could and should have been shorter: far too often, I felt I was attending Philosophy 2.0.1. The worst offender – and believe me, he does well to surpass Morpheus – is the Architect (Helmut Bakaltis), spouting copious pseudo-intellectual gobbledygook, in what seems a desperate stab at deep meaning.

The first half in particular suffers from an overdose of clunky self-importance; while Zion looks fabulous (as does the entire movie), the scene where it turns into Studio 54 had me sniggering into my popcorn. One also wonders about the significance of a world where coloured people seem more numerous – does this also go for the slaves still in the Matrix? What exactly are they telling us here? Hmmm… Luckily, the action, particularly later on, is plentiful and well-staged; the highway chase is every bit as impressive as I hoped. Though when Morpheus fights an agent on a juggernaut, I kept flashing back to Yuen Wo-Ping’s In the Line of Duty IV, where Cynthia Khan battled atop an ambulance, with a much greater sense of danger. Perhaps linked to this, at no point do you ever feel Neo is threatened; can’t help thinking they shot themselves in the foot by revealing his One-ness in the first movie. Hell, what do I know: I fell asleep first time I watched The Matrix, so until Revolutions turns up, I’m not prepared to crucify this. But I do have a hammer and nails ready.