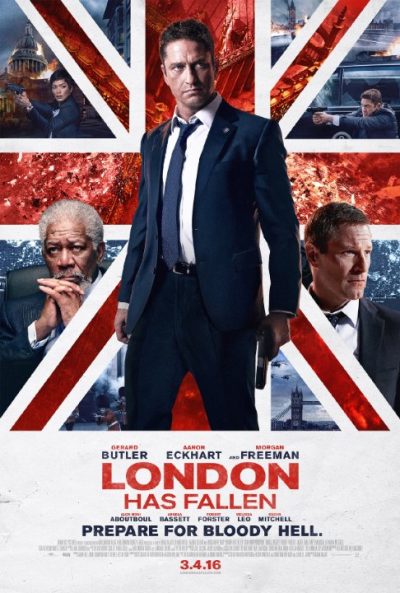 I did see its predecessor, but am damned if I can recall anything about it at all, except that it was one of two films that came out near each other, depicting terrorist attacks on the White House. At least we’ve been spared that here, though it appears most of the cast have returned for no meaningful reason beyond a check. This did have its moments: probably about 10 minutes of it, when the funeral of the late British Prime Minister suddenly turns into an escalating series of incidents, including a gun-battle at Buckingham Palace, a siege at St. Paul’s, the top of Westminster Abbey being blown off and a Really Big Explosion on the Thames, taking out one of the bridges across it. The film, however, shoots its entire load in this sequence, and wants to do little except cuddle the viewer the rest of the way.

The story is more than slightly reminiscent of 24: Live Another Day, which saw a terrorist with a personal grudge against the American President, take that enmity to the streets of London. Here’s it’s disgruntled “arms dealer” Aamir Barkawi (Aboutboul), whose family get-together is the target of a US drone strike, kicking off a quest for revenge on Commander-in-Chief Benjamin Asher (Eckhart). There are also elements of Escape From New York, with the President’s helicopter being shot down over hostile territory i.e. the East End of London, and only a hardcore individual – in this case, Secret Service bodyguard,  Mike Banning (Butler) – can get him out. Or maybe it’s the more recent Big Game, in which the hostile territory was the Finnish forests. But the film also appears to want to be a first-person shooter – and you know how entertaining those are to watch someone else play.

It’s the kind of brain-dead action flick which gives right-wing politics a bad name, ripe for tutting liberal disapproval as it engaged in gun-waving American triumphalism. Even though, in reality, its star is Scottish – call it our revenge for Braveheart – the director Swedish-Iranian, and the locations apparently mostly Bulgarian. Truly, the world has become Hollywood’s bitch. And that’s the problem. Save for 10 minutes of landmarks, there’s absolutely nothing “London” about this at all. Instead, you get a noisy, and almost instantly forgettable generic action film, especially when robbed of the accidental, grimly exploitative angle afforded by a theatrical release just a couple of months after the Paris attacks. It might have been much more fun if they’d done this with a full-on British cast, depicting a terrorist assault on Downing Street and playing up the uniquely Anglo aspects, all cups of tea, with everyone keeping calm and carrying on. Hell, the producers should have got Ara Paiaya and Gary Daniels for it, saved themselves approximately $59 million and received a more entertaining end-product into the bargain.